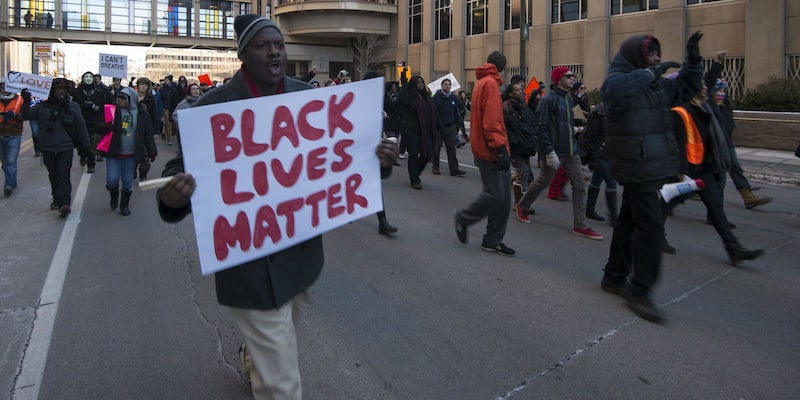 #FreeJasmine calls for her release.

Black Lives Matter activist Jasmine Richards was sentenced on Tuesday to 90 days in jail and three years probation for what used to be referred to as “lynching.”

Richards was arrested in September after trying to shield a fellow protester from police, in what many say was not a riot at all, but a small, peaceful gathering. She was charged with “the taking by means of a riot of any person from the lawful custody of any peace officer.” In other words, “lynching,” a term that was stricken from California law last year.

More than 83,000 people have signed a petition in support of Richards, who has already spent 18 days in jail. Protesters (including, hey look, actor Matt McGorry) gathered outside the courthouse during her sentencing, and the #FreeJasmine hashtag has gained popularity as many point out the injustice in her punishment.

In a statement, Holly Mitchell, a California state senator, said, “It is difficult, when viewing the video of Jasmine Richards’ encounter with the police, to follow the reasoning behind a felony conviction. Sadly, this case is likely to contribute to the notion that justice is selectively enforced.”

Many are certainly claiming selective enforcement, especially given this week’s news that Brock Turner, a convicted rapist, will likely spend as many days in jail as Richards.

Why Is A Black Lives Matter Activist Facing 4 Years in Jail While #BrockTurnerIsARapist Gets 6 Months? https://t.co/rFGQqQ9VVE #FreeJasmine

#FreeJasmine: convicted by a jury with no Black jurors, despite Black people making up 13% of the popu. in Pasadena. pic.twitter.com/MvuOIYD9bu

Apart from being the first black woman charged with “lynching,” Richards is just the latest in a series of high-profile cases in which black lesbians received uncharacteristically harsh punishment for minor crimes or even self-defense.

Richards, an out lesbian who leans heavily toward the butch end of the spectrum, brings to mind the case of the New Jersey Four—four young gay women who each were sentenced to between three and eight years in prison for gang assault after trying to defend themselves in a 2006 homophobic attack caught on video.

Media coverage at the time portrayed the group of black lesbians (three still only teenagers) as thugs, a “wolf pack” that mercilessly jumped an innocent straight man despite witness testimony and video footage to the contrary.

In July 2015, a similar story arose when a young lesbian couple was jailed in Brooklyn after what they said was a brutal and unprovoked beating at the hands of an undercover police officer who used homophobic slurs. Despite being half the size of the officer in question, Stephanie Dorceant was charged with second- and third-degree assault, menacing, harassment, and resisting arrest. All charges were later dropped in front of a grand jury.

According to a 2014 report from Columbia University and the Center for American Progress, “LGBT youth and people of color experience pervasive profiling and discriminatory treatment by local, state, and federal law enforcement agents based on actual or perceived sexual orientation, gender, gender identity or expression, or HIV status.”

Richards is not the only one suffering from the impact of what could be discriminatory sentencing based on gender presentation and sexual orientation, in addition to race. As she prepares to fulfill the jail sentence, she leaves behind her distraught fiancée of five years, April Sagarra.

“It’s difficult. It’s heartbreaking,” Sagarra told The Advocate on Tuesday. “It’s just something I didn’t imagine happening. I fear for her. … I just don’t know what the police are going to do.”

Dr. Melina Abdullah, Richards’ co-organizer, also spoke to The Advocate about her sentencing. “It’s punishment for standing up, just as black people were lynched in the late 19th and early 20th century for standing up,” she said. “It’s really the system’s lynching of Jasmine Richards.”