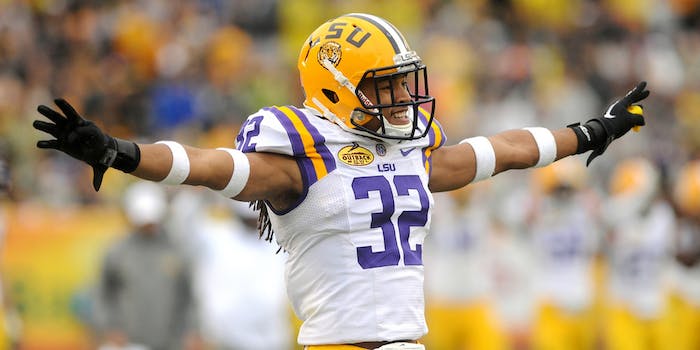 There are some lines you don’t cross when trash talking. This is one of them:

That sign was displayed off-campus at the University of Alabama, ahead of the school’s heated football game tonight against LSU. From the looks of it, some of these dudes were dropped during a keg stand one time too many.

Once the pic made the rounds, the school’s administration apologized for the major lack in judgment and stated that it had been removed.

UA is appalled that anyone would display a banner with such an inappropriate and offensive statement. (1 of 2)

It’s our understanding that the banner was hung at an off-campus apartment complex and it has been removed. (2 of 2)

New York Giants wide receiver Odell Beckham Jr.,  who also happens to be a LSU alum and Louisiana native, had a classy clapback for the classless act. He posted to Instagram a picture of LSU running back and Heisman frontrunner Leonard Fournette, writing: “Katrina never broke us, it made us savages…”

Katrina never broke us, it made us savages… @_fournette7