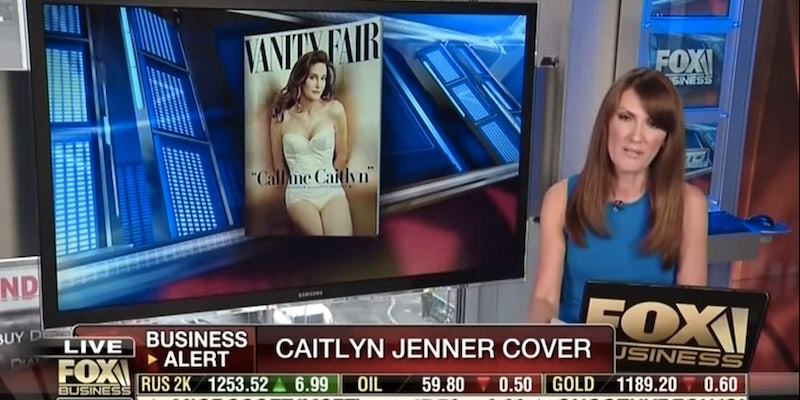 True to form, the news network reacted to Jenner's 'Vanity Fair' cover with its trademark grossness.

Fox News has made a business of being on the wrong side of history. So why should Fox Business’s response to Caitlyn Jenner’s Vanity Fair cover be any different?

On Monday’s edition of Fox Business’ Cavuto, host Neil Cavuto introduced a segment by saying, “Bruce Jenner is now Caitlyn Jenner.” The segment then cut to Jenner’s magazine cover before Cavuto asked Fox Business correspondent Dagen McDowell to explain “what the hell is going on.”

“Bruce Jenner, let’s give him credit. He is the only person on Earth who knows how to one-up his most famous stepdaughter, Kim Kardashian,” McDowell said in reference to Kardashian’s Sunday pregnancy announcement.

She then proceeded to criticize the spelling of Jenner’s surname, noting that “she will use female pronouns from now on.” But she continued to refer to her as “he,” and described her cover outfit as “very Playboy bunny-esque.”

Funny, that’s how most people feel when they watch Fox Business.