It's a fine-looking berry.

Meet the world’s youngest tattoo artist. Her name is Chloe, she’s four years old, and she made her debut in her dad’s tattoo shop where he allowed her to design his latest ink—a strawberry on his arm.

But the dad, 30-year-old Brad Bellomo—who owns the Third Eye tattoo shop in Largo, Florida—has come under fire for allowing his young child to make the permanent drawing on her dad. Needles, after all, can be dangerous. 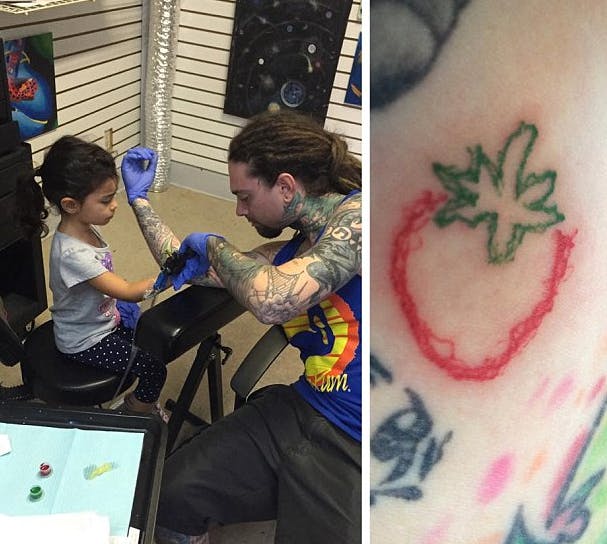 Nearly 120,000 people have Liked the photo, and it’s been shared 14,000 times on Facebook. But at least one person reported Bellomo on Facebook for “graphic violence.”

“I’m a great dad and my daughter is smart enough to know that it’s art and it’s safe!” Bellomo wrote. “Thanks for your support!’

“She had come in here a few times, watched other artists and myself doing the art on the ceiling there and she said, ‘I want to do one.’ And right away, (I) gave her the chance to do one right up here,” Bellomo told Wave3 News.

Soon, she moved from creating art for the tiled ceiling in the shop to creating something a little more permanent.

Already, Bellomo had let his daughter practice on the tattooing machine without the needle. He said, via Yahoo Parenting, that he wanted to make sure the machine wasn’t too heavy as she pretended to trace the tattoos that are already on his body. But Chloe wanted to try it for real. No pain (for daddy), no gain (for Chloe).

As for Chloe’s motivation, she told the channel, “I like to paint my daddy.”