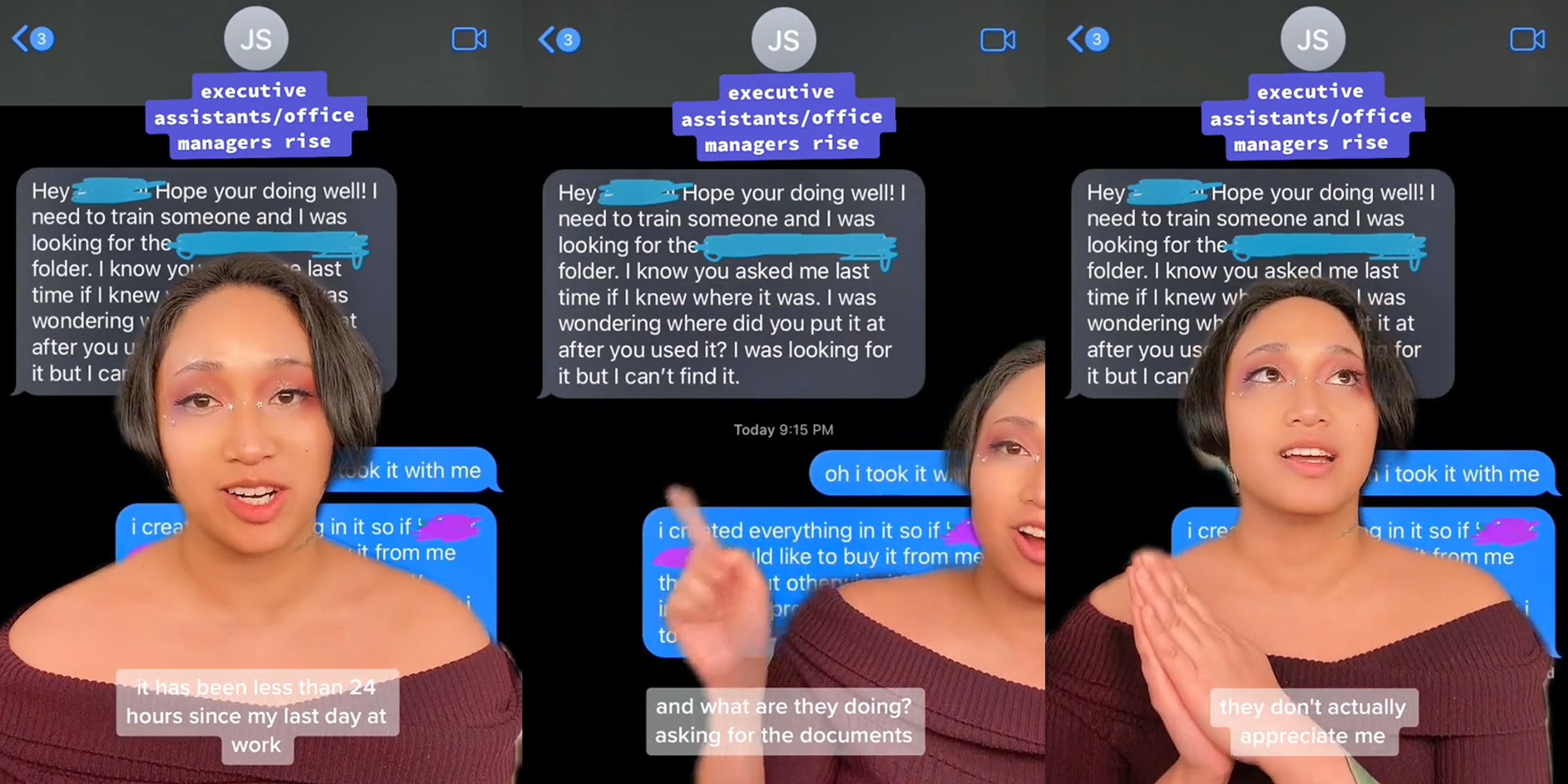 ‘They don’t actually appreciate me’: Worker refuses to give training documents they created to employer after quitting

'That's why I took my documents with me, because clearly, they don't value me.'

A TikToker’s bold video in which they admit to their former boss that they took all of their work product with them when leaving the company has attracted many metaphorical wagging fingers on the platform.

In a video that has been viewed more than half a million times, user @_queerbigan explains how they took home documents they’d created while at work when they left the company, effectively leaving the company without any of those resources.

@_queerbigan like bro do not disrespect one of the key reasons you even hit production goals and get five star reviews! #greenscreen #officemanagement #assistantlife #quittingmyjob ♬ original sound – queerbigan

“It has been less than 24 hours since my last day at work,” @_queerbigan says in the video. “On my way out of work, I took all of the training documents that I created, because they didn’t have, honestly, a lot of things digitally, physically, systemically before me. I was happy to provide those things. I loved my job, etcetera, etcetera, even though they were underpaying me for even the work that I was supposed to do, let alone everything I was doing on top of it.”

The TikToker says the company they worked for had refused to give them the title and pay equal to the work they put in.

“Then they had the gall to give the title and pay of what I was doing to other people, and when I asked for even just a title change, no financial whatever, I just wanted some recognition, they said no because it would be too confusing,” they explain in the clip. “That’s why I took my documents with me, because clearly, they don’t value me, they don’t actually appreciate me, and they don’t know what I do. Because if they did understand what I do then they would appreciate me, they would have no choice. So it’s been less than like, a day since I left, and what are they doing? Asking for the documents.”

Some viewers suggested that @_queerbigan opened themselves to legal liability by admitting to taking their work product with them.

“You can actually get in some trouble for this,” one commenter wrote. “Technically work created on the clock belongs to the company. I’d be careful here.”

“How do people not know when they work for a company, the work they create while at a company belongs to the company,” another user said.

“Hope nothing you took was proprietary because you just admitted you have it,” a third added. “They can probably sue you because you created those documents while working for them. Never say you took something from work. It’s always I have no idea it must be misplaced.”

In a follow-up video, @_queerbigan says they do not believe the company they left would choose to sue, as it would most likely not be financially advantageous to do so.

The Daily Dot reached out to @_queerbigan via TikTok comment, as other methods of contact were unavailable.