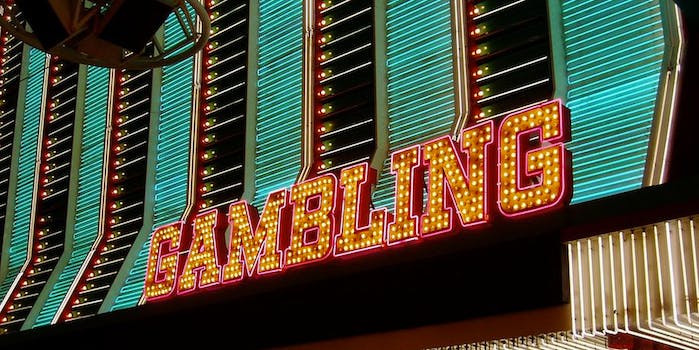 Place bets on your friends’ relationships with Forever Not

Ever meet a couple you knew wouldn’t last a month? Now you can place bets on relationships with an app, in case you didn’t have enough ways to be a jerk already.

Some people bet money on card games. Others, slot machines. Some cheer on a winner in a horse race.

And some download apps and make bets on when their friends’ relationships will crumble into a dust of bitterness and resentment.

The app Forever Not lets people bet on their friends’ relationships anonymously. Like Tinder, it links up to Facebook, so couples you know are mixed with celebrity couples, like, for instance, Kimye. 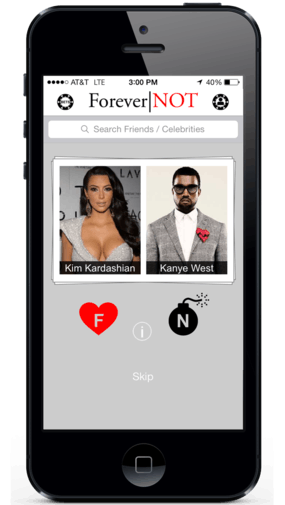 Forever Not looks like an updated version of Hot-or-Not, but instead of one person, couples pop on your screen. Like Tinder, you swipe to indicate your thoughts: A swipe left means the couple is meant to be, and a swipe right means you think the couple will break up in the next 30 days. Unlike Tinder, the couples shown didn’t sign up to be part of Forever Not. They are on there by default. Most, at this point, probably don’t know Forever Not even exists. Perhaps it’s better that way, because finding out that most people have no confidence in your relationship is probably not an affirming life moment.

This app looks like lighthearted fun at first, but it’s almost impressively creepy. I tested it out, and the first couple I got was Amber Heard and Johnny Depp. Since they’re actors I’ve never met, I felt no twinge of guilt swiping right. There’s no way to be more specific, so I couldn’t bet that they’d break up a year-and-a-half from now when Heard comes to her senses and realizes Johnny’s old as hell. But I digress. That part was easy. But swiping on people I actually know felt mean. Forever Not lets users search for people from their Facebook accounts, so you can see their current “relationship score” and recent photos of the couple posted on the social network, making it all the easier to judge them with, I suppose.

I looked myself up, worried that someone had swiped right over my partner and I. The idea that my Facebook friends might have declared my relationship weak made me irrationally angry. Nobody had ranked us yet, but seeing our picture up for betting made me feel like my relationship was on Tinder, a few photos up for swift and merciless judgement. Judgement delivered via swipe.

Strangely, Forever Not asks you to rank your Facebook friends who say they’re in a relationship but don’t disclose who they’re in it with, so you can bet on the love longevity of one friend and a question mark symbol. The app also asked me to bet on just my brother, since he’s not in a relationship. I’m not sure if the algorithm is broken or Forever Not is doing some weird existential thing where it asks people to wager on their Facebook friends’ relationships with themselves. The algorithm’s probably broken. Cannot compute.