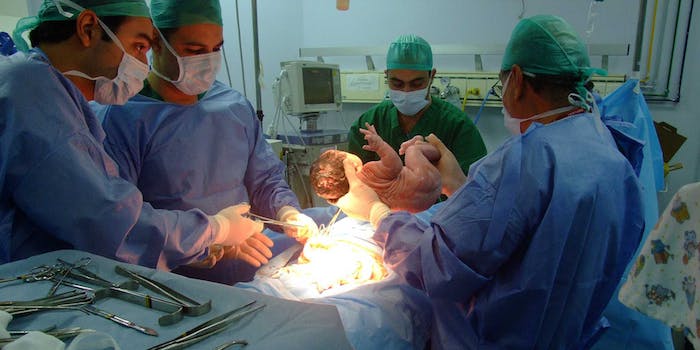 In August 2014, a horrifying video of a woman identified only as “Kelly” surfaced on the internet. In the gruesome (NSFW) clip, we see Kelly, a woman in her twenties and two-time rape survivor, mid-labor, begging the doctor not to give her a forced episiotomy.

An episiotomy is an incision made in a woman’s perineum while she’s in labor, ostensibly to help facilitate the childbirth process. An organization called Improving Birth, which refers to itself as “the voice of the American maternity care consumer,” started sharing the video on social media. Now, Improving Birth is trying to help Kelly get her day in court by hosting a crowdfunding campaign for her legal defense, so she can sue the doctor who forced her to undergo the procedure.

On its website, Improving Birth summarizes what happened to Kelly while she was in labor:

“A woman, Kelly, had her vagina cut against her explicit refusal, twelve times. She had her vagina cut with a pair of scissors after she said no and for no apparent medical reason [emphasis theirs]. This egregious violation of both her physical body and her right to informed consent as a medical patient is on video: twelve cuts, fast and clearly audible to any viewer of Kelly’s birth.”

Episiotomies were once a routine practice during birth, but they’re now only employed when deemed necessary by a licensed physician. This is what the Mayo Clinic says about episiotomies on its website:

For years, an episiotomy was thought to help prevent more extensive vaginal tears during childbirth — and heal better than a natural tear. The procedure was also thought to keep the bladder from drooping and the rectum from protruding into the vagina after childbirth.

Today, however, research suggests that routine episiotomies don’t prevent these problems after all.

Now an online campaign is soliciting support from the public to help Kelly pay for legal fees. The initial goal was $1,500 for her to file the lawsuit and represent herself in court. But that goal was quickly surpassed. More than $7,000 has been raised, and the goal has been upped to $50,000 so Kelly can secure a lawyer and get one step closer to bringing her tale before a judge in California. She has also filed a claim to the California State Medical Board, which has acknowledged receipt of her claim but has yet to provide any indication about a ruling.

Cristen Pascucci, vice president of Improving Birth, told the Daily Dot that Kelly will be filing charges thanks to the funds raised. But instead of filing a medical malpractice suit, she’s seeking damages for assault and battery.

“A lot of women who have had trauma in childbirth say it feels like sexual assault,” Pascucci explained via phone. She said Kelly explicitly told the hospital staff about her past trauma to make sure she would be handled with extra care, only to find herself naked on the operating table, being violated and harmed without consent.

“The number one issue is consent,” Pasccuci said. “She said ‘no’ and was cut. Under California law, when a patient says ‘no’ in a medical setting and a nonconsensual procedure is performed anyway, the tort is assault & battery.”

But this claim of assault and battery might be part of the reason that many lawyers have opted not to take this case, which is being offered on a contingency basis. Essentially, if Kelly isn’t awarded any damages, the lawyer gets nothing. It’s a tough sell.

Matt McMahon, a lawyer who has been practicing medical malpractice for 30 years in New York, suggests that she find a lawyer who will help her sue for battery and malpractice while simultaneously waiting to hear back on the claim against the state medical board. According to McMahon, it’s a good sign that the board hasn’t responded yet, as these claims take a long time to process. It might mean they’re actually considering it.

But he says another problem is that even if Kelly wins the suit and is awarded a settlement, it might not be worth the time and effort for the person representing her.

“From my standpoint, it’s a valid case to bring to court,” he told the Daily Dot via phone of the potential landmark status of the case. “You could end up setting a very important precedent. But if the jury only awards her $100,000, it’s not worth it for the lawyer.”

The issue comes down to “informed consent,” and whether Kelly knew what was being done to her. Anyone can see from watching the video that this was not the case, despite the fact that the voice of a family member off-camera is heard encouraging the doctor to move forward. But there are few current safeguards in place for American women in labor beyond a hospital’s standard Patients Bill of Rights, according to Improving Birth.

In some European countries, women are afforded additional rights when it comes to the treatment of their bodies during labor. Pascucci pointed to the 2004 case of Konovalova vs. Russia, in which a woman in labor was observed by medical students against her wishes.

In the end, the patient was awarded a very small sum in damages, but it established an important precedent for women’s rights. It says in the judgement: “Women have the right to be fully informed, by properly trained personnel, of their options in agreeing to treatment or research, including likely benefits and potential adverse effects of proposed procedures and available alternatives… States parties should also, in particular: Require all health services to be consistent with the human rights of women, including the rights to autonomy, privacy, confidentiality, informed consent and choice.”

McMahon says one potential loophole for the doctor and the hospital is that when it comes to common procedures like episiotomies, a doctor may not be required by law to inform the patient of potential risks involved. But even in the absence of the “informed” part, he still must get her consent.

“I think the video evidence is the most compelling evidence. If she says ‘don’t do it,’ and he’s doing it, clearly he does not have her consent,” McMahon said.

And clearly the issue of consent when it comes to episiotomies is far from exclusive to Kelly’s case. A study called Listening to Mothers II shared the results of a national survey of women who gave birth in 2005 and found that “the great majority of mothers who had experienced episiotomy (73 percent) stated that they had not had a choice in this decision.”

While it seems clear that Improving Birth and Kelly are fighting on the front lines for women’s rights, Dr. Amy Tuteur, an OB-GYN who writes a blog called The Skeptical OB, wondered in a recent post what Improving Birth is trying to accomplish by encouraging Kelly to file a suit that lawyers have told her she can’t win.

“I don’t think its reasonable or appropriate to advise a woman to file a lawsuit that she can’t win,” Tuteur told the Daily Dot in a phone interview.

She sees the great publicity opportunity for the organization, whose focus is on women’s rights, but little potential benefit for Kelly, who must take time off work and travel several hours to file court papers. (She’s moved away from the area since the incident occurred.) And as McMahon pointed out, she doesn’t stand to gain much, monetarily.

Improving Birth and McMahon and Tuteur are all in agreement that Kelly was wronged, and that she deserves some form of retribution for her pain and trauma.

“As a doctor, I thought ‘That’s not the way you do an episiotomy,'” Tuteur said of her reaction to Kelly’s birth video. “What he did was awful. There’s no way to defend what he did. My first thought when i saw this video was, ‘How are we gonna stop this guy?'”

“When this woman came to us with a video of what actually happened, we thought, we’re finally gonna get somewhere,” Pascucci said. “They won’t be able to say ‘She’s just a woman. She’s hysterical. That’s not what really happened.’”

Yet it seems that even this hard evidence hasn’t been enough to move the case forward. She says Kelly plans on publicly revealing her true identity in the coming months.

An earlier version of this story stated that Kelly was suing the hospital for sexual assault. She is actually seeking damages for assault and battery.