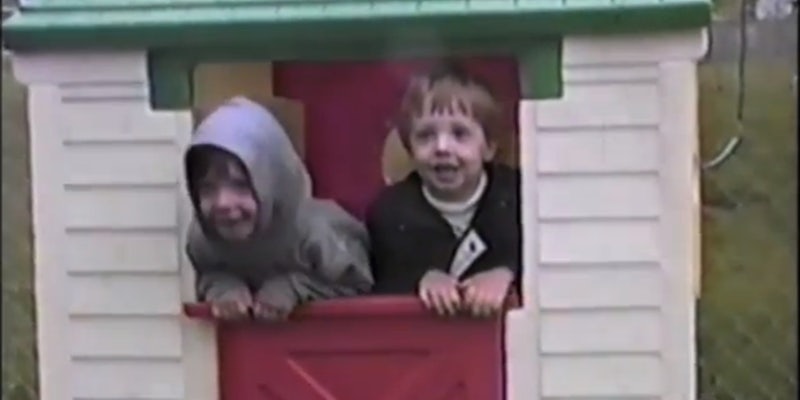 "This video was to show my brother that I do love him and no matter what happens I always will."

There’s a rare bond that twins share that most will never experience, a feeling of a inseparability and a life mutually defined.

This YouTube video captures that unmistakable connection with a rare poignancy. Simply titled “For Michael” and set to a somber indie folk track, it’s nearly six minutes of old home movies that show two brothers in their earliest years together—crawling around the living room, tripping in the yard, and splashing in puddles. It’s a heartwarming display of the ties that bind.

The original poster, a motorcycle enthusiast known as biohazerd87 on YouTube, claims he made the video as a tribute of sorts to his brother, who he’s apparently grown apart from in recent years. His explanation on Reddit, where he said he hoped his brother would see it, is as impactful as the video itself.

We were very close at a young age, evident from this video, but as we grew up we had many problems. It is not my business to divulge his personal issues on the Internet and should he see this video he is more than welcome to tell his side. The point is that we missed out on much of our childhood and adulthood together. He hasn’t lived within 1000 miles in the last four years. That bond that twins have, we will always have that, but there is something missing between us because of the time we lost. There were times we wouldn’t talk for months or years and I would worry about him constantly. It was terrible. Just waiting for that call. That one phone call. I would wait for a phone call from someone telling me they found my brother dead, or in jail for something terrible. It’s impossible watching your other half destroy their own life, and it’s something that is very difficult to describe to people who are not twins. It takes a terrible toll on you mentally, worrying about someone knowing there is nothing you can do while they are on a self destructive path. We’ve said and done some terrible things to each other over the years, things we can’t take back, but we can forgive. This video was to show my brother that I do love him and no matter what happens I always will.

Here’s hoping the video and the accompanying outpouring of support help the two reconnect in some meaningful way, to recapture that early splendor of childhood.