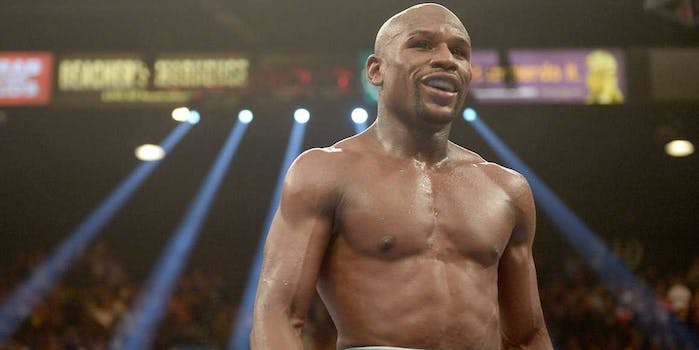 Who is responsible for pulling the credentials of two popular female sports personalities?

Just hours before what is sure to be a record-breaking boxing showdown between Manny Pacquiao and Floyd Mayweather, two extremely accomplished sports reporters—CNN’s Rachel Nichols and ESPN’s Michelle Beadle—have come forward with claims that their press credentials for the fight have been pulled by Mayweather’s camp.

I, along with @Rachel__Nichols, have been banned from the MGM Grand Arena for the fight tonight by the Mayweather camp. #TheFightGame

No fight for me or @MichelleDBeadle. Mayweather's team told my producer the camp was blocking my credential. https://t.co/JTjjXadPp8

In addition to being a future hall of fame boxer—currently holding an undefeated record ahead of his highly anticipated bout with fellow star Pacquiao—Mayweather also has a long history of domestic violence issues.

The 38-year-old has had several convictions for domestic violence against multiple women, and while neither of the reporters have outright claimed that their extensive reporting on the issue is the reason their access was pulled, it is strongly implied.

Here's my interview with Floyd Mayweather from this past fall, the same week the Ray Rice video was leaked: https://t.co/yFiBhEQhFb

Perhaps not surprisingly, Mayweather’s camp has been quick to respond, claiming that both reporters are indeed still credentialed, and that nobody on Mayweather’s side has taken action to revoke their access.

No one including ME banned @Rachel__Nichols from covering the fight. She is already credentialed. #Facts

However, Sports Illustrated has stepped in on the side of the reporters, noting that in the most recent seating chart for the event, Nichols is not listed as being credentialed.

SI has obtained a copy of most recent seating chart circulated by promoters. Two CNN talent listed as credentialed. @Rachel__Nichols is not.

The evidence seems to support the claims that access was revoked by someone, and given that both women—who work for two different broadcasting companies—were told that it was Mayweather’s team that was responsible for their credentials being axed, it’s one heck of a coincidence at the very least.

Update 6:58pm CT, May 2: Nichols explained in a tweet what happened in the lead-up to the fight.