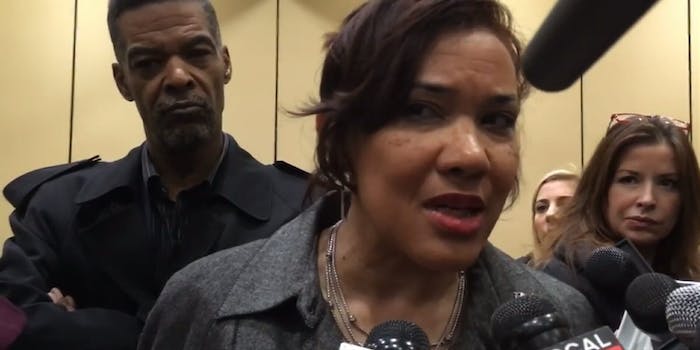 But the City Council claims Weaver is corrupt and incompetent.

Flint Mayor Karen Weaver (D) was elected in part to help deal with the Michigan city’s ongoing water crisis, making her the first woman to ever serve as the city’s mayor. But Weaver claims racism and misogyny may usher her out of office when a recall election begins on Tuesday.

Weaver’s opponents in Flint’s City Council believe she is damaging the public’s relationship with the city, runs an inefficient office, and may be corrupt, the New York Times reports. But Weaver, who is also the first Black woman to serve as mayor, believes the recall is a targeted campaign against her race and gender identity.

“I think we’ve played a bad hand very well, very nicely,” Weaver told the Times. “You wait for a woman to come and clean things up, and then here you come and want to take it.”

Weaver previously ran and won in 2015 by promising to end the Flint water crisis and restore trust in the government. But Weaver’s political career will rest in part on whether the public believes she can end the water’s contamination, which continues after three and a half years, or if her 17 challengers can do a better job.

In the meantime, her opponents fear the city government is incompetent and corrupt, citing a deal between the city and a trash company that’s facing federal corruption charges after an ongoing investigation by the United States government. Weaver’s government ultimately sided with the City Council and dropped the company, although some remain bitter about the situation. One Black city council member, Wantwaz Davis, signed the recall petition and disagrees that the election is targeting Weaver for her race.

“I don’t like the fact that they came in playing the race-card game,” Davis said, according to the Times. “It’s not about Blacks against whites.”

Most of all, Flint citizens simply don’t trust the local government. Regardless of whether that’s Weaver’s fault, this week’s recall election will show whether the city’s residents believe the current government has a handle on decontaminating the municipality’s water.

“The official reason is the trash-hauling contract, but the real reason, I think, is the water,” retired political science professor Paul Rozycki told the Detroit Free Press. “And, frankly, the lack of trust in the whole local system.”