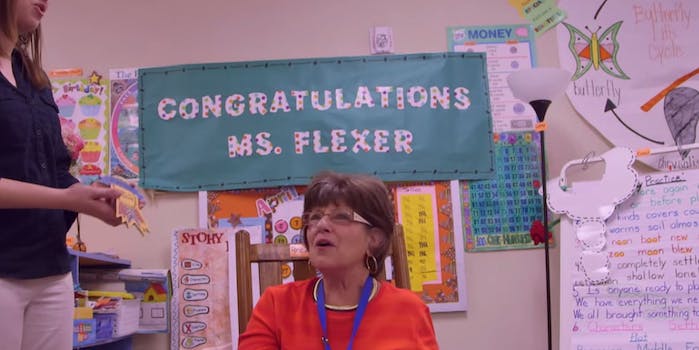 Do you remember your first-grade teacher? Over four decades' worth of students at Cole Elementary School in Tennessee did.

Do you remember your first-grade teacher? Over four decades’ worth of students at Cole Elementary School in Tennessee did—and they proved it with a little help from Kid President.

Mrs. Flexer, who taught first grade at Cole for 41 years, was about to settle into retirement. However, it wasn’t just her current crop of 6-year-olds who were about to bid her adieu. In this clip, former students crowded into her classroom—their classroom—to wish her luck.

And her reaction… well, just watch:

One student from very first year of teaching, way back in 1973, even showed up.

After former students took turns sharing memories with her, she was officially awarded Kid President’s prestigious Medal of Awesome.

On a personal note, hello, Mrs. O’Laughlin from St. Margaret Mary’s School in suburban Philadelphia! You’d be proud of me: These days I write on topics of great interest and importance (like terrorist goats), which wouldn’t have been possible had you not pressed me to write that paper describing my best friend. Thankfully, the Daily Dot doesn’t make legible handwriting a job requirement.