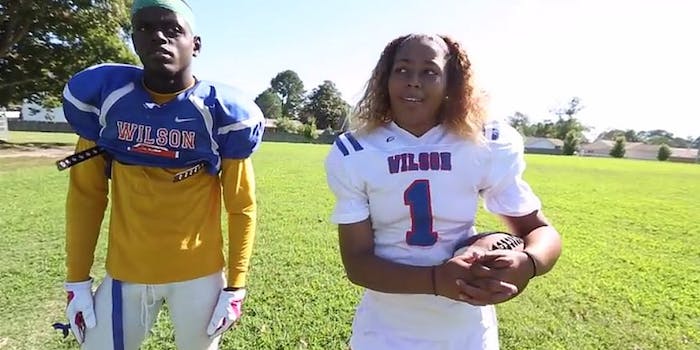 All thanks to a jaw-dropping trick play.

Cynthia Brown, a punter for the Wilson High School football team in Portsmouth, Virginia, will end her football career at the end of this season.

But first, she made a little history, tossing a 52-yard touchdown pass last week that made her what appears to be the first female to throw for a touchdown in state history.

Clearly, this was a trick play the opponents weren’t expecting, especially since the play was invented during halftime of that game. Huge credit also must go to receiver Kevin Whitfield, who made a nice catch off his shoetops and then evaded several would-be-tacklers to get into the end zone.

And do it they did.

What makes the play more impressive was that Brown—who’s accepted a soccer scholarship to Radford University—had to face defenders who were trying to block her punt before realizing she was instead looking to pass.

“The guy coming in was really tall, and I knew I couldn’t throw over his head because I’m too short,” Brown said, via hamptonroads.com. “And I couldn’t lob it, so I threw it sideways to get it around him. I knew it was going to be short. But Kevin came back for the ball and made the play happen.”

Said head coach Ronnie Ratliff: “The defender was blocking her view and she adjusted. And without having any training at quarterback, she did pretty good.”

Here’s a further explanation from Brown and Whitfield.