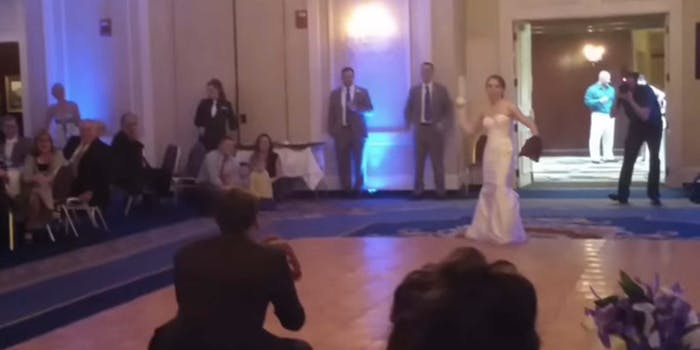 This is totally adorable.

The father-daughter dance is a staple, a classic wedding moment. But what do you do if you’ve never been one to go the “classic” way?

Jim Mickunas writes the following about his daughter, Kandice, for her wedding day:

My daughter has always found her own path. She played Flag football at 6. She hated wearing dresses. She wore a tuxedo to her first communion. She lettered in Soccer and Track. She then became an engineer for the largest automaker in the world when she was 22. I could not imagine having a traditional father daughter-dance with her. That is not what we were or are…So I came up with this. She had no idea!

Kandice was expecting her father to go through the motions of a conventional father-daughter dance. But you’ll notice that they’re not really dancing at the start, not really feeling it. At this point, one of Jim’s confederates walks out on the dance floor with two baseball gloves and a ball. The father-daughter dance turns into father-daughter catch, and after a few back-and-forths, Jim takes a seat to let Kandice’s husband throw the ball.

H/T The Daily What | Screengrab via Jim Mickunas/YouTube