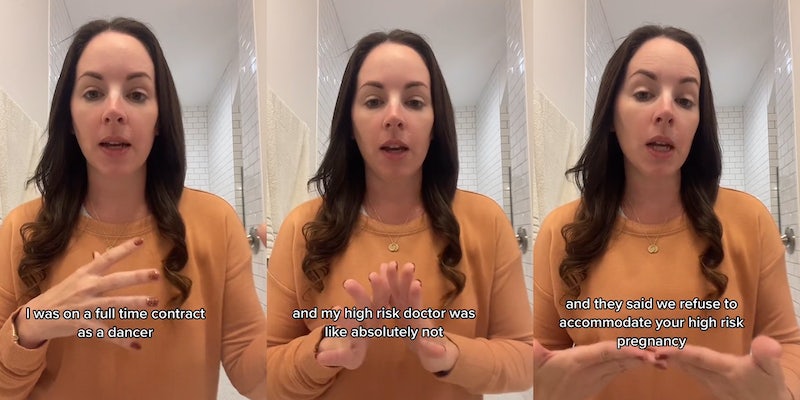 ‘No work, no pay, and don’t come back’: Woman claims employer of 11 years tried to fire her due to high-risk pregnancy

A woman recently went viral on TikTok after delineating how a company she worked with for 11 years tried to fire her for having a high-risk pregnancy.

The TikToker (@hoyttwinadventures) later states that because she decided to stick up for herself, she ultimately was able to keep her job. With the help of an HR employee who took her case seriously, she claims the business decided to change its policies when it comes to the treatment of pregnant workers.

“When I was pregnant with my twins, I was on a full-time contract as a dancer/singer at a major theme park in Orlando, Florida,” she explains, “and once I was too big to fit in my costume, they put you on light duty.”

The TikToker explains that “light duty” consists of carrying props up and down the stairs. However, she says her doctor adamantly opposed her completing those activities due to the strain it put on her body.

“He wrote a note,” she says of the doctor. “I gave it to my management team. My management team gave it to the higher-ups. The higher-ups came back to me, and they said we refuse to accommodate your high-risk pregnancy, and so you’re going to go home. No work, no pay, and don’t come back. So it felt like I was getting fired for being pregnant with twins.”

At that point, the creator immediately claimed she was getting a lawyer, as firing her due to her pregnancy is illegal. She then spoke with the company’s HR team regarding her termination.

In a follow-up video, @hoyttwinadventures notes that she had worked with the theme park for 11 years, so she was upset with upper management’s stance on her pregnancy. She also states that she went through “3 years of infertility” and suffered a “very public loss” of a child she was previously pregnant with. Due to her documented medical history of being high-risk when it came to pregnancy, she and her doctor didn’t want to do anything to jeopardize her or her babies’ health.

After calling the theme park’s HR team at 8pm on a Friday night to resolve the issue, she says they answered the phone to hear her out. The HR employee on the phone was aghast at the treatment she received and said that they “will figure it out.” In less than 24 hours, HR reached out to her to let her know that they found a place for her in the company to work.

She says they secured her an office position, indoors, where she wouldn’t be required to perform any heavy lifting or move around too much. The bulk of her duties would center around answering phones and performing other administrative tasks.

While she was working in her new position, she says she was informed that her case had helped HR to realize that a lot of the policies towards pregnant employees were outdated and needed to be updated.

“What happened to you, we don’t want to happen to anybody else,” the HR employee allegedly told her.

The TikToker adds that if she was a “new employee, or wasn’t like 35 years old when [she] got pregnant,” the outcome may have been much different. However, her history at the company led her to stand up for herself.

Regardless, she was impressed with the company’s HR team and their dedication to addressing the issue. “They kind of learned from that mistake…and put forth the effort to fix it,” she says.

The Daily Dot has reached out to @hoyttwinadventures via TikTok comment for further information.