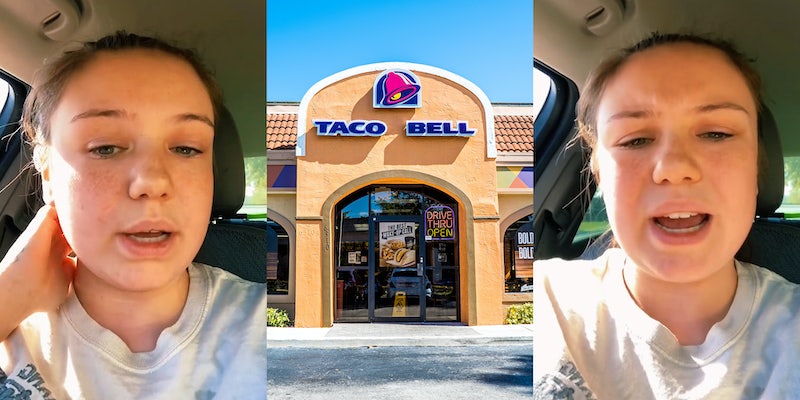 ‘A lot of co-workers are never truly ur friend’: Worker claims she was fired from Taco Bell after co-worker reported her TikToks

'You weren't harming anything just having fun.'

A TikToker claims she was fired from Taco Bell after one of her co-workers reported her for filming and posting dancing videos while on the clock at her workplace.

In a video, posted Oct. 21, Destiny (@dopey227destiny) shared an update to a video of her dancing posted the previous day, explaining that she was reportedly fired from Taco Bell. “I was fired this morning from Taco Bell regarding the videos that I’ve made last night. And occasional tardiness, they wanted to add that in there, because, you know, it’s not a full fire unless they add something else,” she claims.

@dopey227destiny Want to expose the management as well! Ugh so eager to finally be out of there and blow that place up, I got so much fucking tea 🍵 #fy #fyp #foryou #foryoupage ♬ original sound – DopeyyDestinyy

In the aforementioned video, Destiny notes she was upset over the firing as she wasn’t the only employee filming TikToks in the workplace—but was allegedly the only one fired for it.

The video quickly went viral and managed to accumulate over 330,000 views.

Commenters were divided on if Destiny “deserved” to be fired or not.

“I just watched a few of your videos! you weren’t harming anything just having fun,” one commenter said.

“A lot of co-workers are never truly ur friends,” another added.

“Find another job and learn from this experience,” a third said.

Destiny later posted a follow-up TikTok, claiming to have found out the identity of the co-worker who showed her TikTok dances to her managers. “I went in to look at my recently viewed history, and I figured out who it was that reported me. I don’t know why the fuck they would want me to get fired because I’ve never done anything to that person. Let me know in the comments if you want me to expose them,” she says.

The comments section was overwhelmingly supportive with many comments calling for Destiny to expose the co-worker: “FINISH THEM!! we don’t like snitches,” one commenter said.

The Daily Dot has reached out to @dopey227destiny via TikTok comment and Taco Bell via press email.