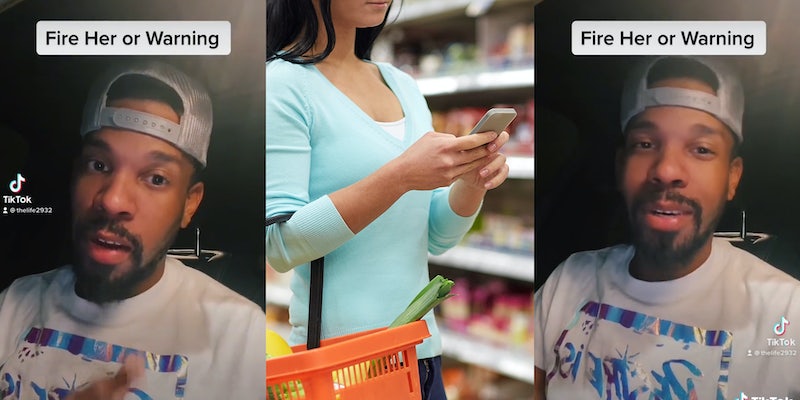 ‘Work representation is key’: VP of company faces ethical dilemma after off-duty worker was rude to him, sparking debate

'This is definitely a teachable moment.'

A company vice president says he’s facing a dilemma after an encounter with an off-duty worker at his company. So he turned to TikTok for help.

The VP, known as Doc on TikTok (@thelife2932), shared a video explaining what happened. He says he was at a grocery store when he saw a young lady wearing a work badge for his company. The lady was being “extremely loud and inappropriate” while talking on the phone inside the grocery store, Doc says.

@thelife2932 What should i do? #ShowOffLandOFrost #fyp #question ♬ original sound – Doc

The TikToker says he asked the lady to continue her conversation in private or at least remove her work badge because “representation is key.” She turned around and told him to “f off.”

“So my question is next week do I call her and her supervisor into my office — because I was a stranger and she doesn’t know me — to express where I’m coming from?” Doc asks in his video. “Or do I just let it go? Or do I just let her go?”

As vice president of his company, Doc says he’s straightforward and makes sure workers are provided with training and resources. He says if his workers do their jobs and represent the company well, they’ll never have a problem.

Viewers had divided opinions on whether Doc should give the worker a warning or fire her. Some said the incident was a “teachable moment.”

“This is definitely a teachable moment,” one viewer commented.

“Definitely call her in with her superior! my company has fired people for this but I think explaining is the best way,” a second viewer commented.

A third wrote, “Warning. Don’t fire her. The job market is rough and you never know what she might have been going through in that moment.”

Some users said Doc should call the worker into his office, explain his point of view and gauge her reaction before deciding whether to fire her.

“Teachable moment and then go from there. see how she acts when you call her in to speak to her and make your decision then,” one user said.

Another user wrote, “Have the conversation with her. He will know very quickly by her attitude if you should keep her or not.”

Someone else commented, “Yeah, call her and her [supervisor] into your office, and see how she responds. Her response will tell you all you need to know.”

But other TikTokers said Doc shouldn’t be concerned with what his workers are doing when they’re off the clock.

“So why do employers care what people do in their free time? sure she had a work outfit on, but would you care if she didn’t work for you?” one user asked.

Another user said, “Since this was not on company property or on company time she was in her own space in public. You should give her just a warning.”

Doc says he planned to only give the worker a warning. But when the worker decided she didn’t want to participate in the scheduled meeting because it wasn’t “worth her time,” her direct supervisor decided to fire her.