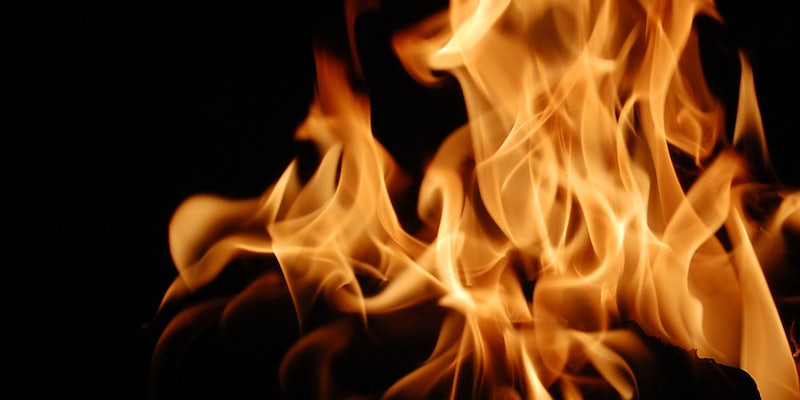 #FireChallenge may be the dumbest teen trend yet

Insert your own Darwin joke here.

This article contains explicit material that may be NSFW.

If you’re worried that we’ve gone a few too many weeks since the last kid-focused, Web-enabled moral panic—i.e., Slender Man stabbings—then you’re in luck: Teenagers are now dousing themselves in accelerants and setting themselves ablaze for Internet glory.

The trend isn’t exactly new, but it seems to have reached a fever pitch in the last week: A 15-year-old in Lexington, Ky., suffered second-degree burns after torching his torso, while a phony report of another boy dying in Buffalo, N.Y., has begun to make the social media rounds.

Especially popular in the last 12 hours was a clip entitled “Fire Challenge Gone Wrong”—as if they can ever go right—which depicts a chaotic bathroom inferno. The young man in this video later appeared in a cautionary Vine, his abdomen heavily bandaged.

The injured Lexington teen remarked that, by and large, #FireChallenge posts never show what happens after the flames have been put out. Asked by WKYT-TV what he had expected from his stunt, he said, “I don’t know, I wasn’t thinking really.” One of the responding firefighters remarked that the boy’s burns would affect him for the rest of his life.

Sadly, even if we cracked down on the sale of lighters and rubbing alcohol to high school daredevils, they’d find a way to put themselves in harm’s way. In May, a “cold water challenge” was blamed for the death of a Minnesota 16-year-old found dead in a freezing lake.