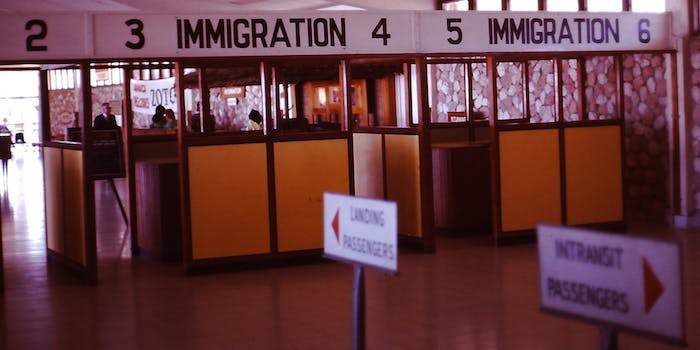 “The president can and will stop this.”

Police arrested dozens of people at a protest in the front of the White House Thursday for engaging in an act of large-scale civil disobedience.

The demonstration, which was dubbed Fight for Families, denounced the deportations of undocumented immigrants that separate children, who are often born in the United States, from their undocumented parents.

A protest organizer pegged the number of people arrested at somewhere between 200 and 300; however, U.S. Park Police said in a statement that 145 protesters were arrested. The demonstrators were taken into custody for sitting down on the sidewalk in front of the White House and refusing move when ordered to do so by police.

Calling the protest an act of ‟civil disobedience,” the arrests were intentional on the part of the demonstrators.

“The folks who sitting there today were willing to get arrested and spend the day in jail to say that the immigration system splitting up families is wrong,” said Chita Panjabi, a vice president at the National Organization for Women, who participated in the protest, but was not arrested.

The demonstration in Washington quickly spread to Twitter, where many online activists spread the #FightforFamilies hashtag:

Many arrests today in front of the White House. Enough to fill at least one Park Police bus. pic.twitter.com/FFfEJaV4rA

Advocates putting everything on the line in civil disobedience outside @WhiteHouse! #FightforFamilies pic.twitter.com/RFuEQX2G3o

“Congress has failed to act, so President Obama must step in to protect hard working immigrants and their families,” protest participant National Organization for Women President Terry O’Neill said in a statement.

The protest comes as President Obama is about to make a major executive action on immigration.

After the continued failure to enact comprehensive immigration reform at the legislative level, Obama has publicly announced a self-imposed deadline to deal with the immigration issue. The Associated Press notes that the most sweeping option on the table would be temporarily halting deportations for millions of undocumented immigrants through an expansion of the Deferred Actions for Childhood Arrivals (DACA) program.

“He really should be working to keep families together,” Panjabi said. “We have to make sure that families aren’t pulled apart by policies that are failing.”

Under the Obama Administration, the number of deportations has increased significantly over what occurred during the George W. Bush years—a fact that’s angered much of the Democrat’s Latino voter base.

“Seventeen American citizen children, today, will be losing their moms or dads for a senseless deportation system that ICE does on daily basis,” AFL-CIO executive vice president Tefere Gebre told ABC News at a protest in front of ICE headquarters earlier on Thursday. “The president can and will stop this. Yes, we can!”

The president’s decision on what executive action, if any, to take on immigration is expect to come sometime in early September.