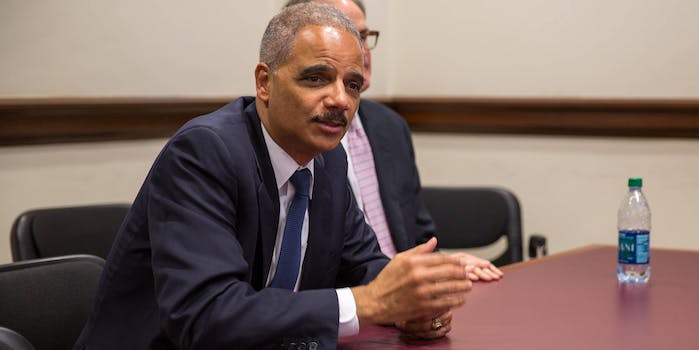 His comments are a real doozy.

The lieutenant governor of Missouri has accused President Obama and the Justice Department of inciting violence on the streets of Ferguson, Mo.

During a phone interview on NewsMaxTV’s Steve Malzberg Show, Lt. Governor Peter Kinder (R) said that the protests in Ferguson following the death of Michael Brown were “based on a lie” and that “there is more racism in the Justice Department” than there is in the St. Louis area.

Perhaps Kinder’s most shocking comment was his description of Attorney General Eric Holder, the first African American to hold that job, as “unlike any previous attorney general.”

Kinder did not elaborate on what, exactly, differentiated Holder from his predecessors, but he did offer further generic criticism of the attorney general and his boss.

“Instead,” he continued, “what we got too often from them was incitement of the mob, and encouraging disorder in Ferguson and distributing the peaceable going-about of our lives in the greater St. Louis region.”

The report found that the claim that Brown had his hands up when he was killed was inconsistent with forensic evidence. Kinder used this finding to suggest that the entire Ferguson protest movement—which is focused on systemic discrimination against the city’s black population by an almost entire white police department—was illegitimate.

Of course, there is an epidemic of racial discrimination at the Ferguson Police Department. The police chief, Thomas Jackson, is set to resign on March 19. The city manager, a municipal judge, a court clerk, and two police supervisors were also forced from their jobs following a separate DOJ report that scrutinized the entire police department. The DOJ found a “widespread pattern of violations of the U.S. Constitution and federal law” in Ferguson.

Attorney General Eric Holder described the abuse of authority as existing “at nearly every level of the Ferguson Police Department.”

While the public’s perceptions of what exactly occurred the night Brown was killed may not be entirely accurate, the attorney general said, “the widespread conditions that these perceptions were based upon, and the climate that gave rise to them, were all too real.”

Kinder simply blamed “Eric Holder and [the] Obama-left and their minions” for being “obsessed with race.”

“The rest of us,” he concluded, “are moving on beyond it.”