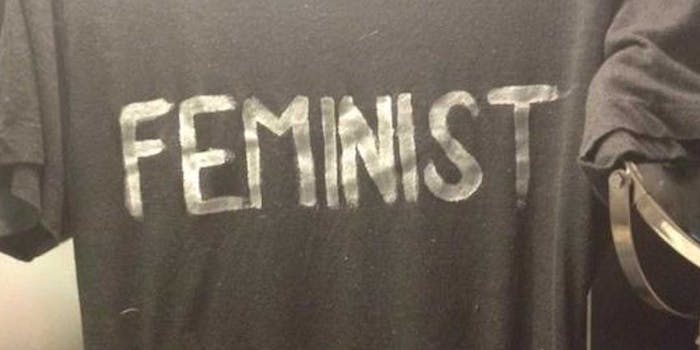 Watch a school trip all over its terrible story.

Sophie is an eighth-grader in Ohio who wore this T-shirt in her class photo:

You can imagine her surprise when the finished photo came out to show her wearing a blank black T-shirt instead:

BuzzFeed got word from the school in question (Clermont Northeastern Middle School in Owensville, Ohio) that this zealous photo-editing took place because the shirt is “unflattering.”

The superintendent of the school, Ralph Shell, said the whole thing was a joke and that the students were in on it. The photo was altered in order to prevent unintended controversies (much like the one taking place now), and was done so with Sophie’s parents’ blessing.

Here’s his exact quote on the matter: “So her parents were contacted and they met with the principal, and they agreed to wipe it out.”

This story doesn’t hold water with her mother, who only found out what happened when one of Sophie’s friends called her to come to the school. The photographer who captured this “scandalous” image called the principal over it, and it was ultimately the principal’s decision to wipe eight letters off a young girl’s shirt.

Cue the activism and backlash. Sophie lead a charge for people around the world to wear similar feminist shirts on the same day and kicked off the hashtag #IDeserveFreedomOfExpression.

Even Sophie’s mom got in on it:

My T-shirt for Feminist Friday in support of my daughter @lamesophie #IDeserveFreedomOfExpression #feminist #equality pic.twitter.com/J5NBsvDWwo

The efforts are being met with an apology from the school. Nothing wraps it up quite as nicely as this caps-locked tweet from one of Sophie’s friends:

THE SCHOOL APOLOGIZED AND IS NOW EMBRACING WHAT WE DID. THIS IS PROOF THAT YOU CAN MAKE A DIFFERENCE. THANK ALL OF YOU THAT SHARED THIS