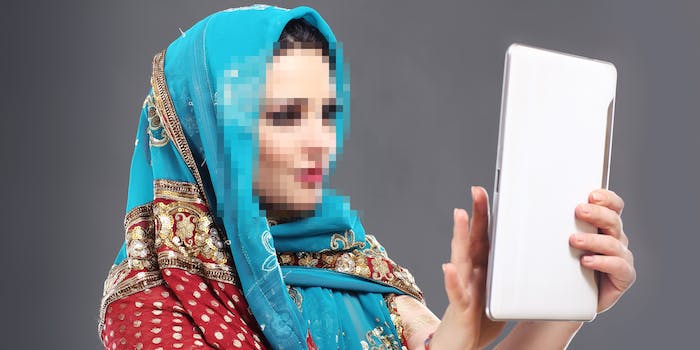 In India, publishing images of rape victims without their permission is illegal.

A viral selfie has cost an Indian official her job.

Rajasthan Commission for Women member Somya Gurjar has resigned from her position in the commission, which advises the government on policies pertaining to women, after she took a selfie with a rape victim. According to the Economic Times in India, Gurjar and chairperson Suman Sharma snapped a selfie on Wednesday with the 30-year-old victim, who had been raped by her husband and his two brothers and tattooed with obsenities, after failing to pay her dowry (which have been prohibited by Indian law since 1961).

In India, it is also illegal to disclose the identity or publish images of rape victims without their written consent, according to Section 228A of the Indian Penal Code. Gurjar explained in the Times, “I was recording her photos for my record, but the victim got interested in the camera, and she asked me what was it. I told her it’s a camera. She asked to me to take her photo also. I only took her photo to put her at ease and because she asked for it, I was trying to be humane with her.”

The image reportedly went viral on WhatsApp, though it’s unclear if Gurjar posted the image there herself.

People have been criticizing the incident under the hashtag #SelfieWithRapeSurvivor. Many have said the selfie contributes to the cultural trivialization of rape, especially since Gurjar is smiling. The incident has also tapped into criticism against Prime Minister Narendra Modi, whom many perceive as caring more about optics than policy. However, many also appear to be annoyed that women were taking selfies together, as if that proves…something about women? We’re not sure.

Somya Gurjar says media is defaming state commission for women by showing only one side. Guess who's having the last laugh – ME.

Good she had at least that much sense #selfieWithRapeSurvivor https://t.co/EleKVvjwri

Gurjar said of her resignation, “I have not done anything wrong but tendered my resignation on moral grounds if my action has hurt anybody’s feelings.” The chairperson for the National Commission for Women called it a “very insensitive” act and has asked Gurjar and Sharma to present themselves before the organization on July 4. Violation of Penal Code Section 228A is punishable by up to two years in prison.