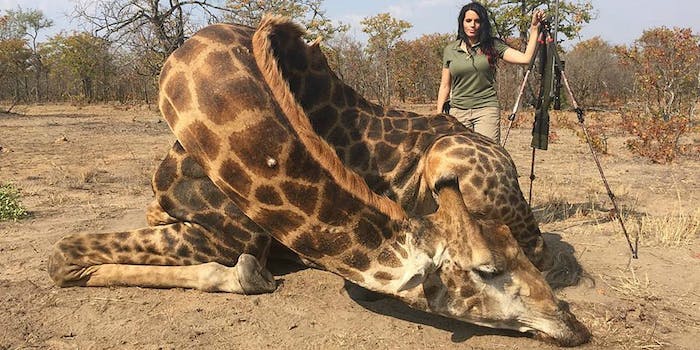 Move over, Minnesota dentist who shot Cecil the Lion.

Move over Minnesota dentist/big-game hunter/much-maligned Internet subject Walter Palmer. Another big-game hunter is on the prowl in Africa, and she’s posting all kinds dead animals on her Facebook page.

And unlike Palmer, who closed his business and issued a statement of apology, Sabrina Corgatelli doesn’t seem to care what you think about it.

It all began July 22 when the accountant from Idaho posted photos of her plane tickets from Salt Lake City; to Dallas; to Doha, Qatar; to Johannesburg, South Africa. Three days later, she posted this.

And… well, as you might imagine, there are plenty of other dead animals to see on her Facebook page.

Facebook commenters have been pouncing ever since. In fact, it’s hard, if not impossible, to find a supportive comment anywhere on her page, but she responded when somebody questioned whether what she was doing was legal.

Wrote Corgatelli, “There is (sic) parts of Africa you can’t, but where I’m at it (sic) completely legal.”

On Saturday, perhaps in response to the overwhelming criticism, she posted two Bible verses, quoting Genesis 9:3, “Every moving thing that lives shall be food for you. And as I gave you the green plants, I give you everything,” and Genesis 27:3, “Now then, take your weapons, your quiver and your bow, and go out to the field and hunt game for me.”

“To me, it’s not just killing an animal. It’s the hunt,” she told Today on Monday. “…Everybody thinks we’re cold-hearted killers. It’s not that. There is a connection with the animal. Just because we hunt them doesn’t mean we don’t have a respect for them.”

Leaving aside how she squares the notion of respect while joyously posing with the dead animal, she also said this about the fierce nature of the giraffe—who are considered by most animal experts to be the leather-jacketed enforcers of the jungle.

Fairly or unfairly, Corgatelli has taken plenty of heat for her escapades, and as she noted to Today she might have some explaining to do to her employers once she returns from her two-week vacation.