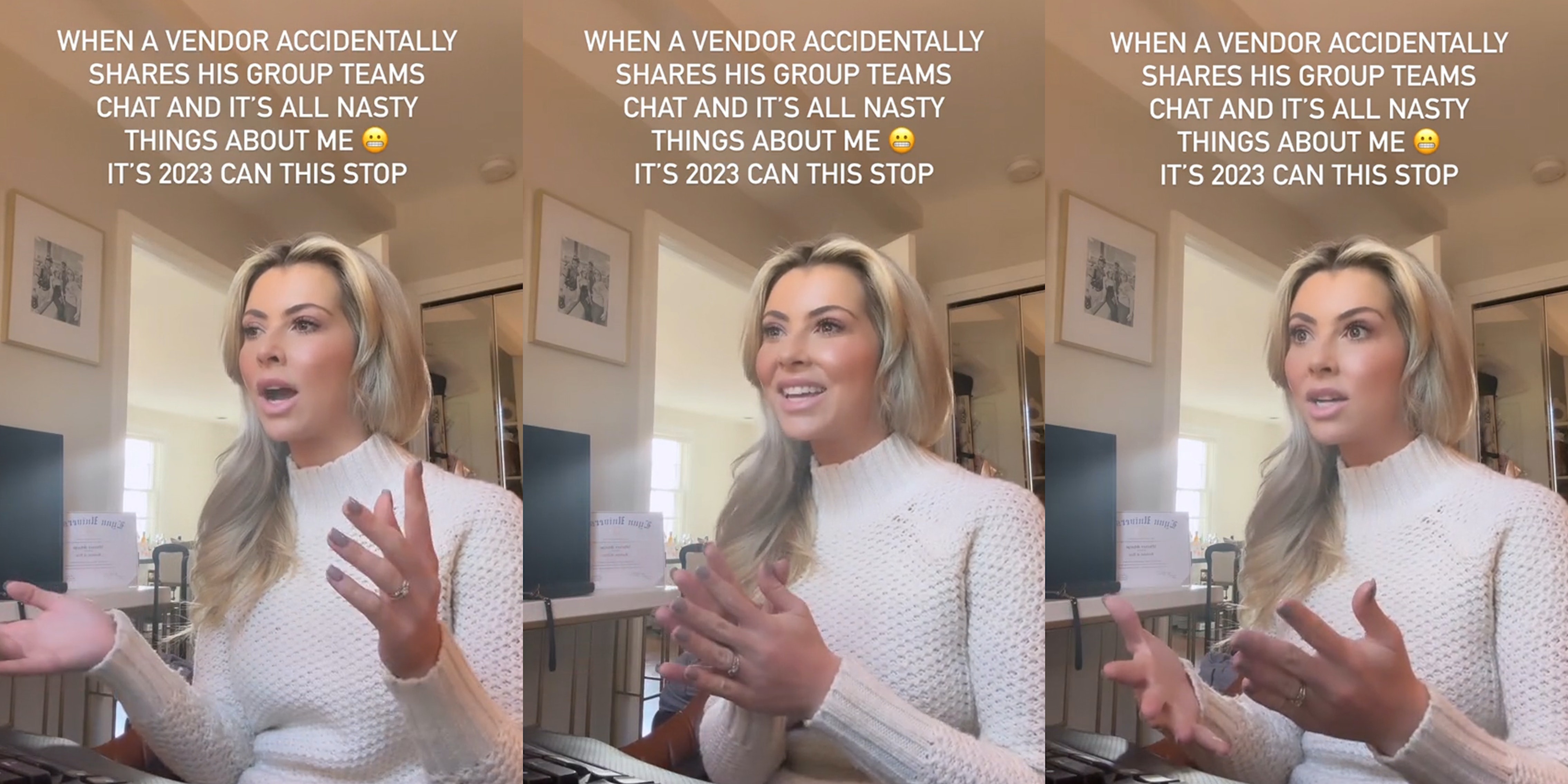 ‘I just don’t want to see locker room talk about myself’: Female employee catches male workers saying ‘nasty things’ about her after they share screen

'WHEN A VENDOR ACCIDENTALLY SHARES HIS GROUP TEAMS CHAT...'

A public relations worker has gone viral on TikTok for calling out a group of male vendors after she saw “locker room talk” about herself in their Teams chat.

“When a vendor accidentally shares his group Teams chat and it’s all nasty things about me. It’s 2023 can this stop,” Sharpe wrote in the video’s text overlay.

In the video, Sharpe confronted the prospective vendor after he showed messages he and his colleagues sent each other about her. The messages were revealed when the vendor shared his screen during their virtual meeting.

“First of all, if we’re going to continue working together, I want to work with a woman sales representative because I don’t want to have to see locker room talk about myself when you’re sharing screens,” she told the vendor.

“I know that was a mistake, but I don’t want to see it,” Sharpe continued. “I like the product. I know it’s tried and true, but I just want to work with a woman.”

The vendor briefly apologized, called the messages “inexcusable,” and told Sharpe there were several other sales representatives she could work with.

Sharpe summarized her situation in the video’s caption. “It’s rough being a woman in a male dominated field,” she wrote.

It’s rough being a woman in a male dominated field 😬

In the comments section, many users praised Sharpe for calling out the inappropriate messages.

“They should be mortified. Good on you for sticking up for yourself!!” one user commented.

“Inspiring to see you address it head-on in the moment,” another wrote.

Sharpe revealed that she received an apology email from the company’s VP of Sales and showed a screenshot of the message in a follow-up video. Despite the apology, she was not able to get in touch with a woman sales representative because the company did “not have anyone skilled enough to assist you that is female.”

“Red flag, red flag! Don’t you see that as a problem?” Sharpe said in the clip. “Why don’t you hire someone? There’s plenty of talented women out in the field.”

At the end of the video, Sharpe said she would “like to receive a phone call” from management to explain what they are doing to “take action.”

Sharpe explained in a secondary follow-up that she decided not to hire the company as a vendor after receiving a call from the VP of Sales.

“He called me to do damage control, basically to save the sale,” she said. “I cannot work with a vendor that does not support women in business.”

The saga continues. I can’t thank you all enough for the love and support. There’s so many bad ass women out there 💖

In an email to the Daily Dot, Sharpe said the company she works for “has been nothing but supportive” following the incident.

“I’ve had multiple calls today to ensure I feel safe and supported in our work environment. Our HR team is following all the necessary steps and procedures by investigating this further,” she wrote.

She continued to say that she “tells all the young sales professionals [she] mentors that there is such a thing as bad business.”

“Call out injustices in the moment, and if you face retaliation, then we don’t want their business anyways,” Sharpe advises.