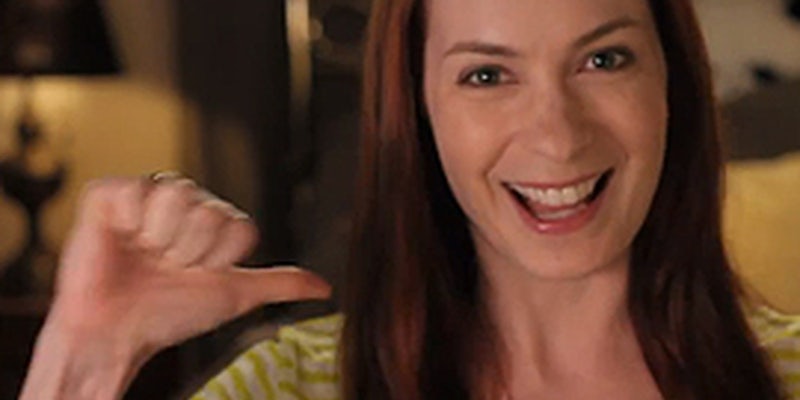 The YouTube star takes the Daily Dot behind the scenes for Season 6 of The Guild and addresses gaming culture's "growing pains."

“Dear reporters,” Felicia Day tweeted this summer, “getting a bit tired of being held up as an ‘authentic’ geek as you write posts against women who ‘exploit’ geek culture.”

Day is clearly in an unusual position. As an actress, her work has placed her squarely within niche geek culture: first as Penny on Joss Whedon’s Web musical phenomenon Dr. Horrible’s Sing-along Blog’, and then on her own hit show, The Guild, a warm-hearted parody of geek culture about a girl who joins a misfit group of gamers. Her work landed her the role of Holly Marten on kooky Syfy series Eureka, a part written just for her.

As such, Day is frequently touted as geek culture’s go-to girl, its answer to recurring claims of widespread misogyny and sexism. But turning Day into the poster girl for “real” geeks is one more example of the undue expectations placed on women in geek culture—and no one knows this better than Day herself.

Last spring, the 33-year-old Day made the risky decision to move The Guild under the umbrella of her new premium YouTube channel, Geek & Sundry. In April, Forbes predicted Day’s channel “could help blaze a trail for the future of network television” by proving “that programming designed for niche audiences makes more sense—and more money—on the web than on cable.” No pressure, right?

Six months later, The Guild is entering its sixth season, and Geek & Sundry has over 350,000 subscribers. Day talked to the Daily Dot about authenticity, geek culture, and being a Web media guru.

DD: On The Flog [Day’s personal vlog] you seem to be making the point that geek culture doesn’t have to be expressed in stereotypically masculine or nerdy ways in order to be fun or have a mass appeal. Is that a part of Geek & Sundry’s overall mission, or just your personal vlogging style?

A main part of Geek & Sundry is encouraging community and enriching lives with our videos, so if we can introduce geeky subjects to people in different ways, make people reconsider subjects they might have decided were “not for them,” that’s a big win for us. Every show on the channel reflects my personal style, and the Flog is the most personal of the shows, so I guess the eclectic nature is reflective most of who I am.

DD: At the Dragon*Con panel for The Guild, most of the cast members said that Season 5 (where the group goes to a gaming conference) was their favorite. Why do you think that is?

As fun as it is to watch the scenes where The Guild members are in their offices talking over the Internet with one another, as an actor they’re probably the least satisfying, because you are acting in a vacuum; the other actors aren’t WITH you when you deliver lines. Season 5 was shot like a movie as well, and on location, so it felt most like a mainstream TV shoot to date.

DD: Do members of The Guild cast collectively identify with geek culture, or were some aspects of it new to some of you?

Personally I’ve discovered things like Steampunk only through my going to conventions with the show. I don’t think geek culture should be pigeonholed as one thing; it’s whatever people are enthusiastic about, and enthusiastic about sharing with other enthusiastic people. As a whole, The Guild reflects my personal interests, but I’ve certainly had my horizons broadened during the show.

DD: Of all the characters on The Guild, who do you think has grown the most, and how?

I think if you track Zaboo’s character, he’s been through a TON and come out a more interesting character in Season 6, which we really press with the storyline later on. And clearly [Day’s character] Codex has emerged from her very depressive world into a whole new life with Season 6, which was the whole aim, to heal her over the seasons.

DD: Can viewers expect the return of Fawkes or other characters *cough* Wade *cough* in Season 6?

We have a few returning characters, but not them, sorry!  Some of the new characters are my faves in a while though, so I think viewers will find new people to love.

DD: I really love how much Clara upends the whole nurturing mother stereotype. Was that something you originally intended for the character, or did it come from Robin Thorsen?

That was the concept of the character going into the script; Robin brought a good-naturedness to the character that made her likeable, not horrific, though.

DD: To me, The Guild is more a pastiche of nerdiness in many forms than a plot-motivated drama, but I do wonder if there will ever be serious consequences for the characters who use the game to avoid dealing with “real” life, like Clara or Bladezz.

This is a comedy, so although we do have some deeper moments like Zaboo and Codex at the end of Season 2, generally we will let the characters be dysfunctional, because that’s why we love them.

DD: Do you see Codex as the character who holds the group together, or does that change depending on the situation?

She is definitely the heart of The Guild. I couldn’t see everyone hanging out with each other as much without her to facilitate.

DD: From the time you started promoting the show with “Do you want to Date my Avatar?” you’ve consistently shown your female characters being thrust into sexual roles within gaming culture. The Guild isn’t an “issues” show, but is that something you write with an awareness of portraying?

I have never called attention to our characters as “girl gamers;” we are gamers first, and female incidentally.  I think gaming is going through some growing pains, with women taking more of a vocal part of the culture, and there’s somehow a new “cool” factor among a vocal minority of young gamers to be blatantly misogynistic. It’s mostly trolling, but I worry about pockets of the Internet that kids isolate themselves to that might make them think this is acceptable. And cool. It’s not, and allowing them to bully people by “not feeding the trolls” might make the situation worse in the long term. It’s very tricky and not fun to be the focus of it, believe me.

DD: You’ve also recently had your share of criticism for not being a “real” geek. Do you think that criticism comes from the traditionally narrow parameters of what a “geek” is, or does it have more to do with sexism in geek culture?

I think it is sexism, as I rarely see these controversies around men who like geek things. The bottom line is that I cannot chase down and educate every naysayer myself; life is way too short, and I have plenty of fans who understand me and understand that I only do things I have a passion about.

DD: Codex is literally at the center of her gaming world by the end of Season 5. Was that a plot development you wrote in part to speak to those types of criticisms?

Actually Season 6 is more aimed towards some of these external things, as the season unfolds you’ll see a lot of themes centered around criticism and creation. Buried under comedy, of course.

DD: With Geek & Sundry, how do you determine what kinds of shows you add to your roster, and are you looking to add any new shows in the near future?

We are always looking for new ideas, fresh perspectives and quality shows we can boost with our network.  Cross fingers we get picked up by YouTube for another year of content; we are definitely aiming to add new shows to our roster. It’s the biggest treat to help other people tell stories.