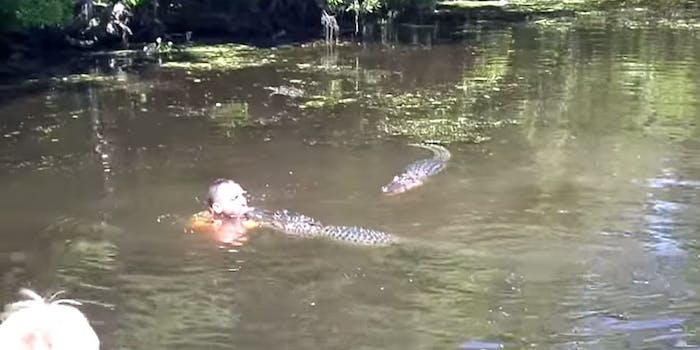 One tourist's vacation video could mean trouble for a wildlife touring company.

One tourist’s vacation video could mean trouble for a wildlife touring company.

When Stacy Hicks took a Louisiana wildlife tour in May, she uploaded a video of her Airboat Adventures tour guide, Lance, demonstrating a unique way to feed the alligators seen on the tour. As her tour group looked on, he jumped into the water, swam with the gators, and fed them marshmallows straight from his mouth.

It wasn’t long, however, before Hicks’ video began to attract the attention of a lot more people than just YouTube users.

According to the New Orleans Times-Picayune, Louisiana state wildlife officials are in the process of reviewing the popular video. While the practice of feeding alligators is not illegal in Louisiana, the area in which Airboat Adventures is located, Jefferson Parish, has banned it.

Neither the tour guide nor Airboat Adventures has publicly commented on the issue.