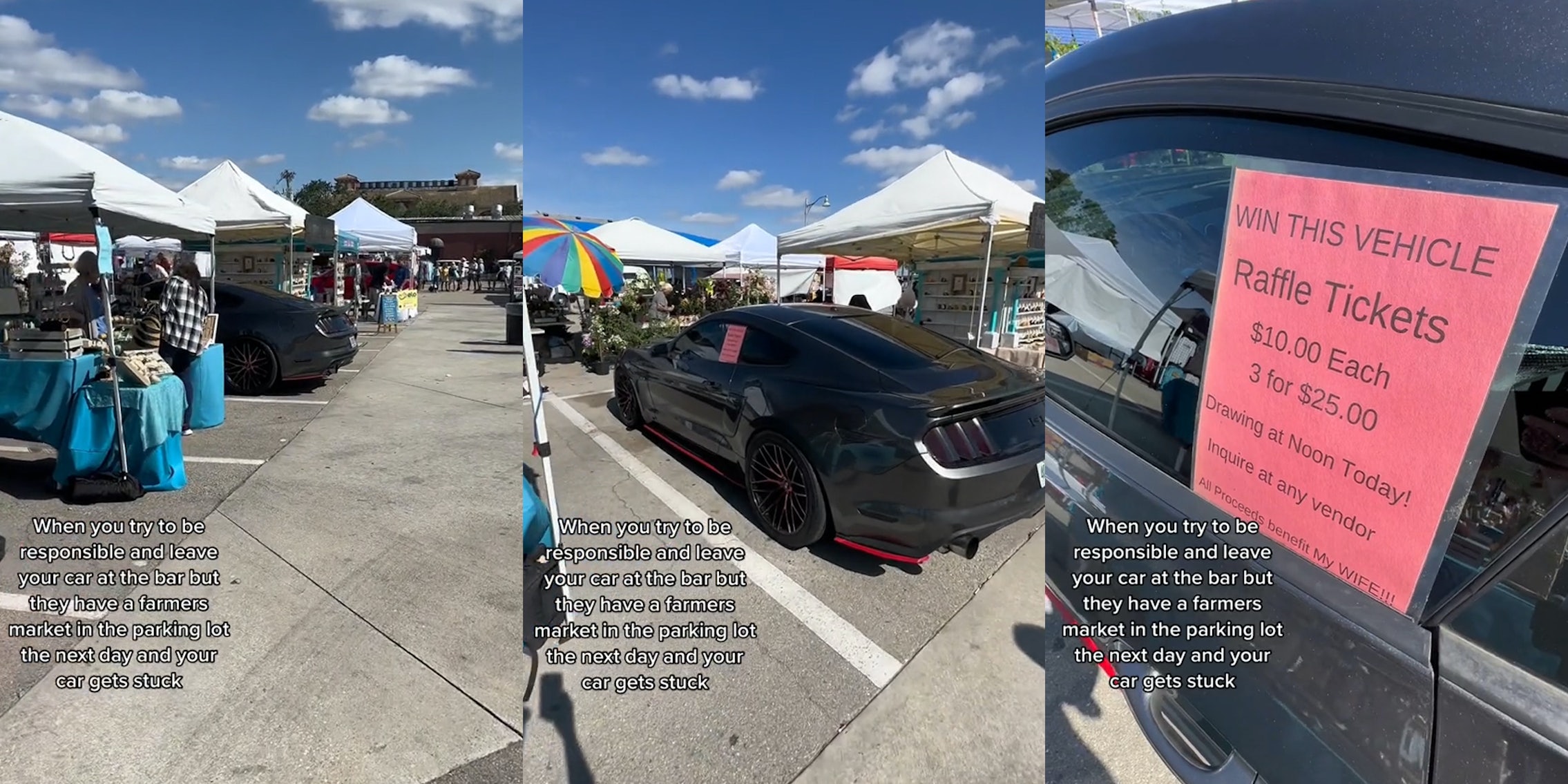 ‘When you try to be responsible and leave your car at the bar’: Woman says farmer’s market tried to raffle off car after she left it in parking lot overnight

'Being responsible never pays off.'

A woman claims that her friend’s attempt at being a responsible driver backfired—and almost left her without a car.

In a TikTok video, user Hannah (@hgrunxo) says her friend Miranda left her car behind at a bar, but it got caught in the middle of a farmer’s market the following day. Instead of leaving the vehicle alone, however, Hannah claims vendors set up their tents around the car and attempted to sell it. Her video has over 1.2 million views.

Being responsible never pays off. Miranda has since gotten her car out 😂

In her short video, Hannah walks through the farmer’s market until she locates the car. A pink note taped to the driver side window reads: “WIN THIS VEHICLE. Raffle tickets $10.00 each. 3 for $25. Drawing at Noon today. Inquire at any vendor. All Proceeds benefit My WIFE!!!”

“When you try to be responsible and leave your car at the bar but they have a farmer’s market in the parking lot the next day and your car gets stuck,” text overlay on the screen reads.

In her video caption, Hannah says that Miranda was able to retrieve the car. “Being responsible never pays off,” the caption reads.

It’s not clear from the video what Miranda had to do to get her car back. Hannah wrote in the comments, however, that she thinks the attempt to sell the car was a joke. “They have this market every Saturday apparently so it must be common for cars to still be from overnight drunkies,” she says.

Indeed, a number of TikTokers wrote that they, too, had similar experiences after leaving her cars in parking lots overnight.

“One time I left my car parked in a lot all day and a car meet got set up around it,” one user wrote. “I had to drive my ‘07 Altima out of there in shame.”

“I did this one time and they towed my car into the next parking lot lmao,” a second comment reads. “No ticket or fine, they just moved the whole thing.”

“This happened to me! I parked my car in a lot that allowed overnight parking, came back at 7 a.m. to find tents setting up around my car,” another TikToker said.

The Daily Dot reached out to Hannah via TikTok comment.