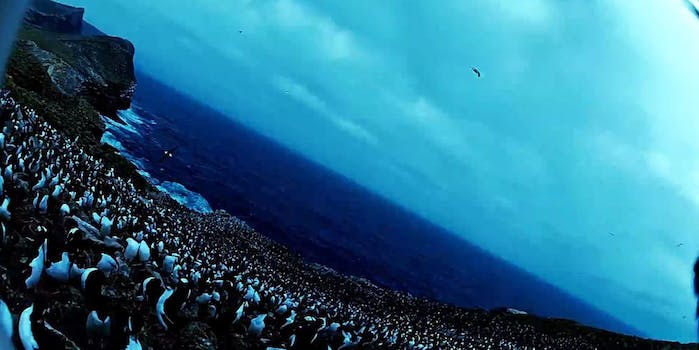 All this bird wants is breakfast, instead it films an awesome shot for a nature documentary

It was a bad day for the bird, but a good day for ornithology nerds.

It ought to be have been the best moment of this striated caracara’s day. Coasting over a colony of rockhopper penguins, the falcon spotted an unhatched egg—an unlikely find indeed, considering all the other eggs on the island had already hatched. The caracara grabbed the thing with its talons and took off over the colony, located somewhere in the Falkland Islands a few hundred miles off the coast of Argentina.

Unluckily for the bird, the egg was a fake, planted by producers of the BBC nature documentary “Penguins – Spy in the Huddle.” Luckily for us, it was also a spy camera. So as the falcon lifts off across the island, we’re treated to a stunning aerial passover of the entire penguin colony, thousands of black-and-white forms milling about a grassy cliff while the sea churns below.

The colony fly over, however, is only the beginning of this egg’s adventures with very hungry, and very confused, birds.