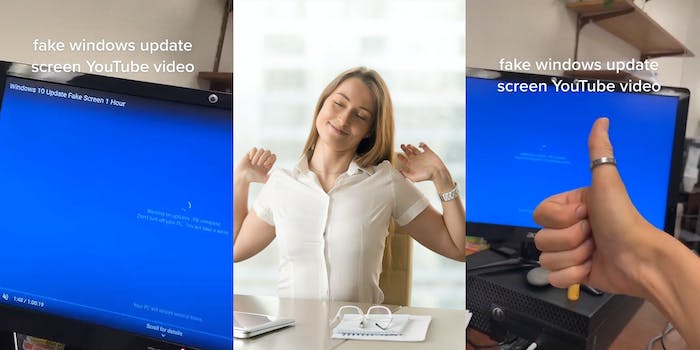 ‘It’s crazy how many people are brainwashed into loving work’: Woman leaves YouTube video of fake Microsoft update on her computer to get out of working

In a viral video, TikToker Kocho (@hylandurrr) showed her computer screen at work that was playing a fake Microsoft Windows update screen on YouTube video for an hour.

“It’s fuck these jobs and nothing else,” she captioned the video.

When a user in the comments section asked what prompted the TikToker to do this, she responded that “there are often times at my work where there is literally nothing to do and I’m expected to sit around and wait for something to do while also looking busy.”

The comments section was divided as users argued over whether the action was ethical and how companies can monitor your computer screens at work.

“Yeah IT can see what you’re doing on a company machine,” one user commented.

The creator clarified in a comment that her company is small and does not have an information technology team. She advised users to not do this if they work for a major corporation.

While several users called the “life hack” hilarious, many criticized the TikToker for her dishonesty.

“Or…hear me out….do the job you’re paid to do and stop trying to get out of it,” a third said.

“It’s crazy how so many people hate to work,” another wrote.

“It’s crazy how many people are brainwashed into loving work or thinking it’s weird others don’t love work,” the creator replied.

This isn’t the first time the TikToker has spoken about her grievances at her job. Her account often features TikToks where she encourages an anti-work mindset, telling viewers to give their jobs the “bare minimum.”

As for advice on how to waste time at work, Kocho provided tips in the comments section on where to find these videos.

“For anyone interested: Take A Break on YouTube. They have a ton of different options,” she said. “Enjoy getting some of your freedom back comrades.”

The Daily Dot reached out to Kocho via TikTok comment.