Meet The Hummus, the Onion-esque site with an Islamic twist

In their 2007 book, I Am America (And So Can You!), satirical late night host Stephen Colbert and his writing staff weren’t afraid to have a few laughs at the expense of religion.

In the middle of the fourth chapter (matter-of-factly titled “Religion”) they take turns going after each of the world’s major organized religions. Catholic saints are referred to as “God’s customer service reps” for instance. Agnostics are deemed “atheists without balls.” And Quakers are credited with only two things: “Oatmeal and Richard Nixon.”

But when the writers came to Islam, the joking came to a screeching halt. The entire passage for Islam reads:

“Islam is a great and true religion revealed in the Holy Koran which was dictated by the angel Gabriel to the final prophet Mohammed, Blessing and Peace Be Upon Him.”

Of course this itself is a joke when taken in context. The sudden break in jocularity for a solemn verse in praise of the Islamic faith plays into the stereotype that Muslims have no humor when it comes to their own religion.

In the years since 9/11, it’s a mold that’s hardened in the minds of many non-Muslim Americans amid a general rise in Islamophobia. The reputation certainly wasn’t helped in 2006, when a series of Danish cartoons depicting Mohammed sparked violent riots and demonstrations in Muslim countries around the world. Many traditions of Islam consider any portrayal of the prophet to be blasphemous. Even years after the cartoons ran, extremists have tried to attack the newspaper and cartoonist responsible for them.

But the image of the violent, humorless Muslim is one that founders of the new satirical website The Hummus are hoping to change.

Creators of The Hummus wanted a funny way of examining Islam, Islamophobia, and broader culture while expressing their own views. What they’ve come up with is like a version of The Onion geared specifically for Muslim-Americans.

The site began last summer as a blog founded by Babba (the three primary writers/editors behind the site for now choose to go by the aliases Babba, Kamal, and Jiddo). But quickly their ambitions grew.

“Babba started The Hummus as a satire blog to intellectually vent his thoughts about the conflation of Islam and culture, and Islamophobia, and then teamed up with me and Jiddo once we realized it could be more substantive,” Kamal tells the Daily Dot.

Like their most obvious influencer, The Onion, the writers of The Hummus adopt a faux journalistic style to produce articles that range from pointed satire to absurdism. A sampling of headlines since their re-launch back in December include “Conversion Of Ryan Gosling To Islam Halts Arranged Marriages Nationwide,” “Muslim On Airplane Fails To Smile Wide Enough, Pilot Makes Emergency Landing,” and “Radical Imam Tears It Up On The Half-pipe.” 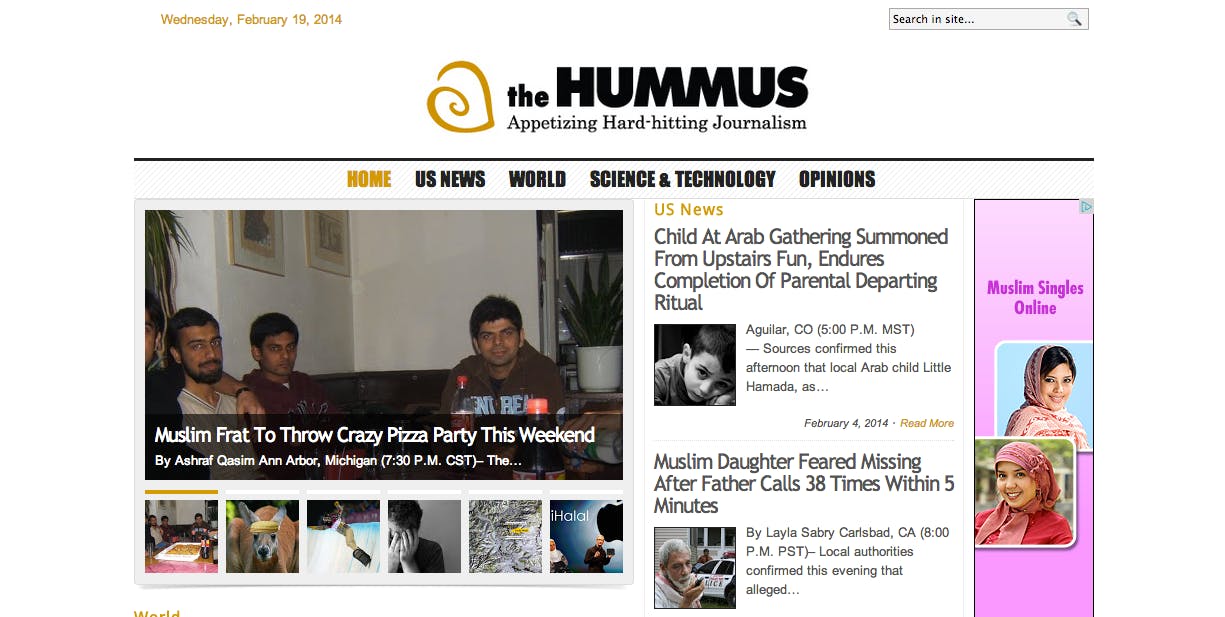 As three practicing Muslims from the Bay Area, Babba, Kamal, and Jiddo found themselves needing a way to express their thoughts about living as Muslims in America. Influenced by the likes of Jon Stewart, Bassem Youssef (the so-called Jon Stewart of Egypt), Stephen Colbert, and Maz Jobrani, they want to produce comedy with a political and social edge.

The site has attracted a bit of a following in its first two months. At present, they have 2,800 followers on Facebook. And the creators say it’s not just fellow believers in Islam who are checking out the site.

“The reaction has been positive from both Muslims and non-Muslims,” said Kamal. “Muslims appreciate and understand the idiosyncrasies we discuss in certain articles, while non-Muslims appreciate the humor in articles with wide appeal, like ‘Muslim Daughter Feared Missing After Father Calls 38 Times Within 5 Minutes’ because you can replace Muslim and it’ll be applicable to many non-Muslims.”

Despite the positive reaction, The Hummus probably has a tough road ahead. As comedy industry blog Splitsider recently noted, nobody has ever done fake news online quite as successfully as The Onion. There have been attempts, such as The Daily Currant, The Whiskey Journal and The National Report. There have even been other Onion copycats aimed at particular demographics, like women’s news send-up The Reductress. And although one’s opinion of just how funny these sites are is subjective, few would argue that any of them have had near the level of cultural impact as The Onion.

But as of now, Babba, Kamal, and Jiddo seem up for the challenge. Presently they are putting out three to four stories a week, but they are looking to increase their comedy output and expand their pool of writers. Those interested in writing for the site are encouraged to email [email protected] with the subject line: “I want to be the pita for your Hummus.”

Like most comedians, the Hummus writers are first and foremost interested in making people laugh. But there is also the glimmer of hope that through humor they can end the stereotype of the humorless Muslim who can’t laugh at himself. Even their site’s name hints at this hidden agenda to break down cultural barriers.

“We picked the name Hummus because it’s delicious and because of its wide appeal,” Kamal said. “It has roots in the Middle East but it’s enjoyed by Muslims and non-Muslims alike.”

Photo via The Hummus