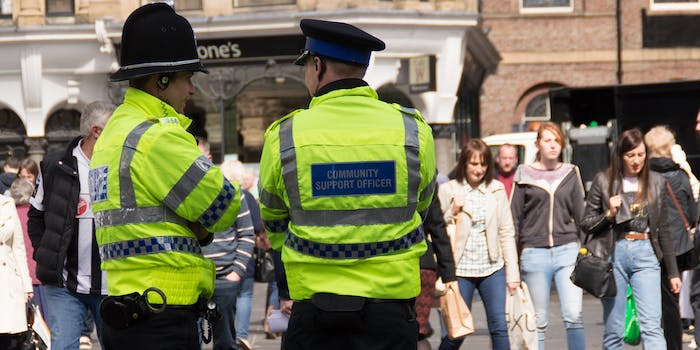 The program is growing, seemingly unchecked.

Police in the U.K. have reportedly added up to 18 million images to a national facial recognition database.

That British police collect mugshots is nothing new, nor is the fact that the British government possesses facial recognition software for law enforcement purposes.

But according to Alastair MacGregor, the U.K. Biometrics Commissioner—an independent advisor to the British government on subjects like facial recognition software, fingerprint data, and DNA samples—the program has recently drastically expanded, and seemingly without oversight.

MacGregor told the BBC’s Newsnight that police now have a searchable database of mugshots, created without the knowledge of either his staff or the Home Office. What’s more is that the searchable database includes not only mugshots of criminals, but also photos of potentially “hundreds of thousands” of innocent people,” he said.

The service is used not only by police officers wearing body cameras, but also by British spy agencies and law enforcement that tracks the country’s airports, the report said.

Critics and police differ on the likelihood of the program’s effectiveness. An officer in charge of the program at one station told the program that it was completely reliable if the image was clear. But MacGregor disagreed, saying “certainly I’ve been led to believe there are grounds for doubts as to just how reliable the current technology is.”

It’s not clear that Parliament is taking immediate steps to step in with the program, but several MEPs, including Liberal Democrat Davis Laws, have called for reform.

Photo via mrgarethm/Flickr (CC BY 2.0)