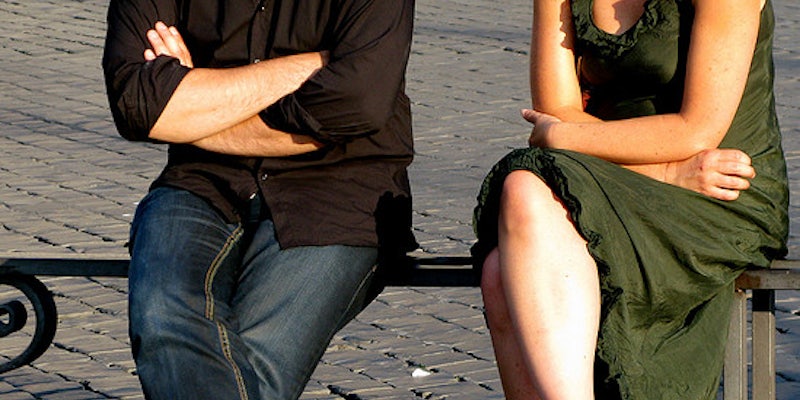 A British survey finds the social network is widely mentioned in divorce petitions.

Last month, the Daily Dot reported on a YouGov poll that showed that more than three-quarters of the photos tagged on Facebook in the United Kingdom showed subjects inebriated—and that 65 percent of the participants tagged friends to “embarrass them.”

Now comes a new study by Divorce-Online, a UK-based legal services firm, claiming that a third of the country’s divorce petitions filed in 2011 contain the word “Facebook.” The survey sample featured 5,000 different cases and found a 13 percent increase in Facebook mentions from a comparable 2009 study.

Correlation does not imply causation, obviously, but those drunken posts certainly can’t be helping many marriages.

“If someone wants to have an affair or flirt with the opposite sex then [that’s] the easiest place to do it,” surmised Divorce-Online spokeperson Mark Keenan in a statement. “Also the use of Facebook to make comments about ex-partners to friends has become extremely common with both sides using Facebook to vent their grievances against each other.”

The top three reasons for linking a divorce to Facebook were:

There’s been no shortage of Facebook drama in courtrooms, most notably when a Connecticut judge ordered a couple to exchange passwords for each other’s accounts on the social network.

And it’s not hard to imagine an inappropriate poke, distasteful comment, or poorly timed check-in on Facebook throwing one’s relationship status into jeopardy.

Just imagine the dirty little secrets that could be unearthed by Facebook’s new Timeline feature, which makes it easy to scroll through a user’s entire history of posts.

But according to the Wall Street Journal and the Centers for Disease Control and Prevention’s National Center for Health Statistics, marriage and divorce rates in the U.S. have actually declined in relation to Internet usage. Likewise, an annual survey by Grant Thornton, an accounting and consulting firm, has found that infidelity’s role in divorce proceedings has remained stable.

Regardless, the survey serves as a reminder that Facebook is more than a social network: It’s a full-employment act for divorce lawyers.