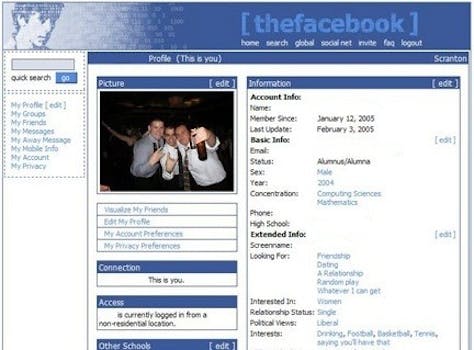 The 2006 Internet thought opening to the public would kill Facebook

In September 2006, Facebook decided to allow anyone with an email address to sign up. At the time, a lot of people believed the site was setting itself up for failure by welcoming the masses.

Six years ago today, Facebook—then a budding social network with a user base of less than 9 million comprised of college and high school students—made its site available to anyone who wanted to sign up.

At the time, analysts speculated that Facebook’s decision to open up the floodgates was largely an attempt to make itself more attractive to potential buyer Yahoo, which was reportedly planning to offer up to $1 billion. The sale obviously never occurred.

No one foresaw this meteoric rise, at least not immediately. Sites like Mashable, Lifehacker, and TechCrunch were cautious in making any predictions, choosing to take the “let’s see what happens” approach in their reporting of the news.

The commenters on the aforementioned blurbs were not so prudent in their projections. Quite the contrary: Most of them channeled their inner Chicken Little and claimed that doing away with the exclusivity would result in Facebook’s demise.

“Facebook should never have positioned themselves as direct MySpace competitors, at least outside of the college student space,” remarked TechCrunch commenter Kevin Briody.

“Focus on what they do best, woo advertisers with incredibly deep targeting amongst a very desirable demographic, and make loads of cash. Don’t become Yet Another Social Network and go the way of Friendster.”

“I don’t see this going well for Facebook,” Mashable reader Josh also noted. “If Facebook becomes ‘just another social network’ it might make their investors happy (the potential for growth would obviously be far, far larger), but it will be at the risk of further alienating their core users.”

“Frankly, who new is this going to include?” asked another commenter TechCrunch.

“Burger Flippers? The unemployed? High School dropouts? There aren’t many in that demographic trying to get onto Facebook or who even care about Facebook. Tens of millions is going to be a gross exaggeration.”

But not everyone decried Facebook’s decision.

“Facebook DESERVES the popularity of MySpace,” wrote Lifehacker commenter dep. “I hope they take a big, juicy bite out of MySpace’s marketshare.”

“I applaud their latest move to expand their scope and hope they do well in this very competitive (but ripe for competition) space.”

“Somebody needs to give [MySpace] competition because they obviously could care less about anything,” Chris Griffin mentioned on Mashable, “you know normal things such as uptime and improvements that every other website in the world care about.”

And give MySpace competition they did. Mark Zuckerberg’s venture quickly overtook the News Corp. owned site, which had 49.1 million users in 2006.