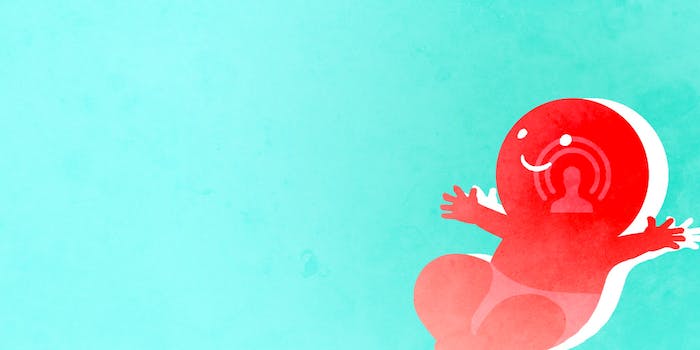 Well, now it's sort of weird.

A California couple and their emerging baby made history this week when the child made his trip from the uterus to the outside world while his father recorded it all for an audience watching on Facebook Live.

It seemed like a sweet story of a proud father showing the world how beautiful the birthing process can be. But it’s since been revealed that Kali Kanongata’a didn’t have his partner’s permission to film the scene and that Kanongata’a didn’t know himself how far-reaching his video eventually became.

“She kind of didn’t know about the live aspect, and I hinted to her that my cousin said, ‘Keep pushing,’ and from that point on, I figured that she knew she was on live because I’m always doing something live,” he told CBS News.

Considering the video has racked up more than 200,000 views, it didn’t take his partner, Sarah Dome, long to figure out what had happened. Asked by CBS Sacramento when she realized what he had done, she said with a laugh, “I think after. He sent me a message right after.”

But neither of them could have predicted how popular the video would become. Kanongata’a said he only meant to show his family who lives in Tonga how the birth was progressing, but he didn’t realize thousands of strangers were joining in on the viewing party.

“I thought it was just going to my family and friends,” he told People.

He briefly thought about stopping his recording, but, much like the son who was on his way into the world, Kanongata’a bravely soldiered on in the face of all barriers and obstructions.

“We just see it as a positive,” Kanongata’a said. “I know some people are mad that it’s not private, but I’m from the island [of Tonga], and years ago, we would have water births in public. I wasn’t too worried about hiding anything because our culture has done this for thousands of years.”