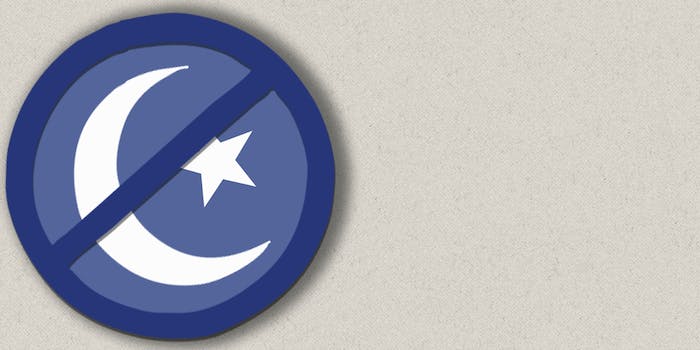 Is Facebook's hate speech problem out of control?

Just as social media offers opportunities for connection between cat owners and dubstep fans, it also serves to unite people who share common hatreds: incorrect grammar, the female sex, or, in the case of Ban Islam, a religion practiced by 1.57 billion humans worldwide.

Over the past few weeks, we’ve seen Facebook try to get a grip on its hate speech problem, pledging to do a better job of enforcing its community guidelines, which state:

Content that attacks people based on their actual or perceived race, ethnicity, national origin, religion, sex, gender, sexual orientation, disability or disease is not allowed. We do, however, allow clear attempts at humor or satire that might otherwise be considered a possible threat or attack.

The humor defense didn’t hold much water in the case of rape jokes, and it shouldn’t in the matter of religious hatred. Nevertheless, Ban Islam, a hopelessly reductive and appallingly racist community page, has been going strong since September of 2012, racking up nearly 50,000 likes with its torrent of sensational bigotry.

Who exactly should be banning Islam? And how? That’s not exactly clear. The group’s owners are anonymous. But the official description makes their attitude plain, if not their agenda:

This page lets people who are against Islam come and protest in any way they wish. There will be many images and comments that Muslims will find Offensive.. This however does not matter as there is many things that Muslims do that we find offensive. Take this as a warning to any muslims who wish to come to view this page. DO NOT COME HERE TO TELL US TO REMOVE THE PAGE.. This will not happen. Feel free to express your opinions and views… try to keep it on topic and factual. Appeasers can feck off though

The content is equally unambiguous: a stream of image macros, news stories, political cartoons, quotes, and casual incitements to violence and oppression. 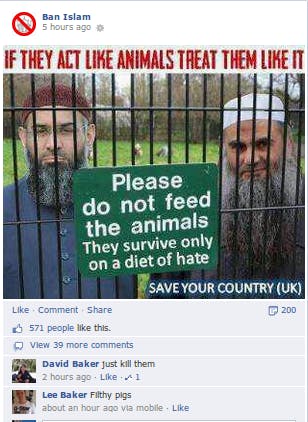 When they aren’t painting events like the Boston Marathon bombing as endemic clashes of civilization, as opposed to isolated aberrations, the community engages in gross and tired stereotypes. One post features a supposedly Muslim man floating in a pool on an inflatable boat. The caption reads, “anything to avoid getting a wash.”

Commenters immediately cry to “sink that boat” or “throw bombs in the pool.” They’re predictable, but even more stunning are the attempts of some members to be voices of reason despite their xenophobia.

“Lets not be evil.what does it say about us cause we would be no different from them,” wrote one.

Another agreed: “half the people on this page are no less violent or immoral as the common muzzrat.”

“Muzzrat,” of course, would be a vile and not especially imaginative epithet for “Muslim.”

This cognitive dissonance—let’s wipe out a religion because it’s intolerant and evil—is at the heart of Ban Islam. The page’s admins dredge up grotesque news from around the world of rape, torture, terror, child brides, abduction, and murder—anything they can construe as religiously motivated. When Islam isn’t a part of the story, brown skin or beards or headscarves serve to make it one.

Most posts commit the same logical fallacy—if something bad happened in a Muslim country, or a Muslim committed a crime, then Islam as a whole is to blame. It’s like attributing the Columbine massacre to atheism (which some Americans, admittedly, would be more than happy to do). 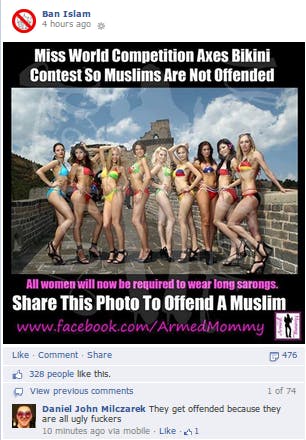 When not fomenting rage among its own constituents, Ban Islam is hard at work attacking groups that promote religious and ethnic tolerance (the distinction is often lost around here). On Sunday there were calls to storm a pro-same-sex marriage page for daring to note that not all Muslims are AK-47-toting maniacs.

While Ban Islam occasionally attempts to make the case that Islam is toxic not just to a Western way of life but to the millions living under its influence in governmental form, much more often it explodes into hysterical, unfounded claims, all presented as objective truth. Here’s a post without a link or source, however dubious, of any kind:

FACT: women are lied to so they can convert to Islam and then brain washed, there is a system in place to use taquiyya and kitman. Once converted it means death leaving. Muslim women are used just for breeding and be slaves (its why they try to convert as many as they can to breed us out)

The club has been in operation for nearly a year, despite Facebook’s legal ability to remove hate speech from the site. Though the U.S. government, under the First Amendment, can’t constrain free speech, private companies are under no such obligation.

One wonders how much further Ban Islam would have to go before getting banned itself, especially as its been active for the better part of the year. As others have pointed out, it’s often not until the media covers a specific hate group that moderators take action against it. A request for comment on the matter from Facebook went unreturned.

Update: Following the publication of this article, a Facebook representative reached out to the Daily Dot with this message:

The page in question violated Facebook’s terms and has been removed. Pages, like all other content on Facebook is subject to our Community Standards and terms and we take action that Pages that violate. In addition, we maintain a robust reporting infrastructure that leverages over 1 billion people who use our site to keep an eye out for content that violates our terms. This reporting infrastructure includes report links on pages across the Facebook site and a trained team of reviewers who review and respond to reports.

While the shutdown of Facebook’s biggest and most vociferous anti-Islam league comes as welcome news, a search reveals plenty of other hate groups that actively target practitioners, often seeking an ill-defined “ban” on the religion, whether in Canada, Myanmar, or worldwide.

How much longer they can operate undetected—or simply uncensored—is anybody’s guess.