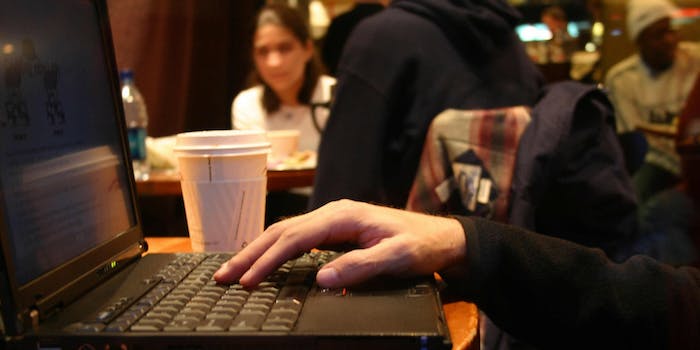 Someone please just agree to be this man's girlfriend already.

Think you have the worst luck at online dating? Meet Predrag Jovanovic. He’s a 34 year old Serbian man, and over the past few months he’s been looking for love online by sending 5,000 messages to women on Facebook—and he has yet to receive a positive response. So yeah, think about Predrag the next time you’re moping at a bar, bitching to your friends about how that cute girl with the duck tattoo on Tinder won’t message you back.

Predrag, who lives in a village outside the Serbian capital Belgrade, says he started soliciting women on Facebook because he has “little other choice,” as there are few available women in his town (“only married women and grandmothers,” he says).

He also—and this might come as a surprise to you, given what he looks like and the fact that he’s sent 5,000 messages to strange women on Facebook—says he has a hard time talking to the opposite sex. Twist!

“It is so very hard to meet women face to face these days. Those who go to bars or clubs are usually attached, those you meet perhaps by chance in the street don’t want to know because they paint you as a weirdo if you try to talk to them,” Perdrag told the Huffington Post UK.

“Facebook seemed the perfect way to try to sell myself to these girls. Unfortunately it hasn’t worked out as I planned.” That’s because your messages are probably all going to the “Other” folder, sweetie.

Shockingly, Perdrag has received a handful of responses to his Facebook queries—15, to be exact. Yet all of them so far have been polite refusals. “The rest of them simply ignored me. When someone ignores you, that is the worst thing of all,” he says.

Perdrag’s story would be incredibly sad, if his methods weren’t so creepy. Seriously, dude, what made you think it would be a good idea to message strange women without their consent and ask if they’d fly to Belgrade and have sex with you? That’s, like, a step and a half above sending someone a dick pic on the sketchometer. Maybe that shit would work in a John Cusack movie, if John Cusack played a shy Serbian villager with a wireless connection, but it ain’t gonna happen for anyone in real life.

Predrag says he has no intention of ceasing and desisting with the Facebook messaging until he finally gets a bite, so I think the only solution is for some philanthropic-minded lady to take one for the team and just be this dude’s girlfriend already. You’d be saving this poor guy more heartache, not to mention preventing millions of ladies’ Facebook inboxes from getting clogged. You’d also probably get a free trip to Serbia out of it if you played your cards right. I’m told the beaches of Ada Ciganlija are lovely this time of year, right when the pygmy cormorants start nesting.