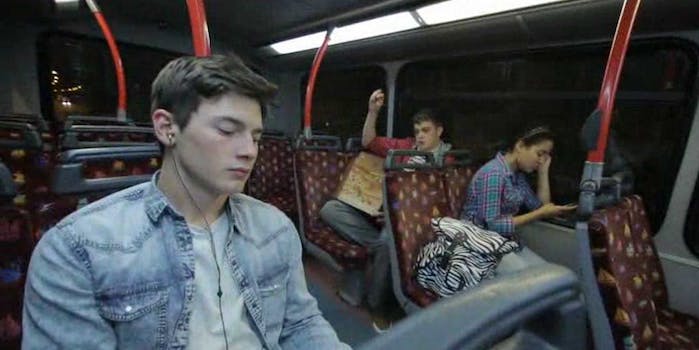 Facebook film teaches you how to react to a public stabbing

Or: Why you should never interact with anyone on public transportation (unless they might die).

While the U.S. has something of a gun problem, over in the U.K. it’s knives you need to look out for. Stabbings are prevalent enough across the pond that the British Red Cross hopes to mitigate the Bystander Effect, or the tendency of witnesses to accident or assault to ignore or refuse to involve themselves in the crisis at hand, with an interactive Facebook video.

Once you give “Witness” access to your Facebook profile, you become a character on a bus—one headed to your hometown—at 11pm “last night.” You don’t have control over your actions, but you watch an incident unfold while occasionally peering at your phone, which displays hypothetical texts and Facebook chats between you and your real-life friends.

Things turn ugly when a disturbed young bus passenger starts spitting and “chucking pizza”—about as plausible a behavior as any for some dangerous wacko on public transportation—causing most people to move to different seats. One unlucky guy stays behind, gets drawn into an altercation, and is finally stabbed by the suspicious character.

What happens next, the video argues, is up to you: Don’t just pretend there isn’t a man bleeding profusely from a stomach wound, and don’t ask people online what to do—instead, call an ambulance and stop the bleeding. One young woman rushes to the victim’s aid while you and others remain rooted to your seats, doing nothing.

Pretty depressing, but also a stirring wake-up call to know appropriate First Aid and help those in need when you can, rendered fiercely realistic with the inclusion of your own personal details. This isn’t just something that happens elsewhere, to others, but to you, in your own backyard. Wouldn’t you rather have the courage to step in when it does?