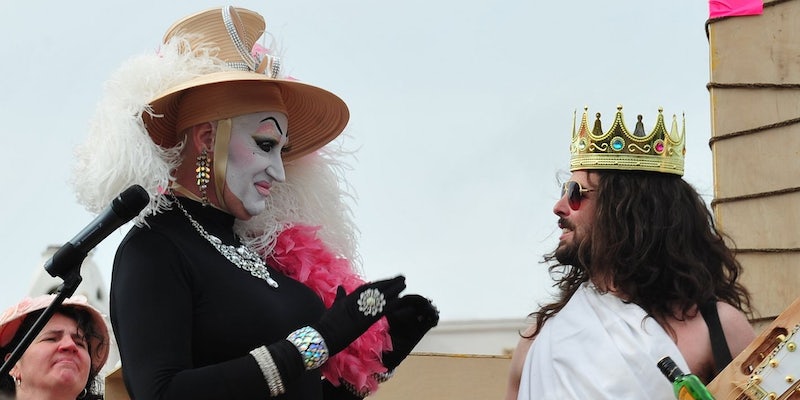 Facebook has laid down the law: Use your legal name on your personal profile or be locked out.

If there were ever a group of individuals not to piss off, it’s drag queens. These personalities and performers have fought too long and too hard for acceptance, let alone stage time, to go down without a fight. Yet Facebook is doing just that: blocking performers from using their assumed names rather than their legal ones. Performers including Sister Roma.

Sister Roma, a widely known LGBT personality and member of the Sisters of Perpetual Indulgence, was targeted by Facebook on Wednesday for having her stage name, rather than her legal one, appear on her personal Facebook profile. “I was automatically logged out and told my account was suspended because it appears that I’m not using my real name,” Sister Roma told the Daily Dot. “I was instructed to log in and forced to change the name on my profile to my “legal name, like the one that appears on your drivers’ license or credit card.'”

Until Roma conformed to the site’s demands by adjusting the page to reflect her legal name, Michael Williams, her account was suspended. Having been on the site as Sister Roma since 2008, this was the first time she had ever been prompted to change her name.

The name change demand is part of Facebook’s latest efforts to “keep our community safe.” “Let me be clear,” Roma said, “I have never attempted to deceive anyone and I’m certainly posing no threat.” The site stipulates that a name displayed on a personal account must be “your real name as it would be listed on your credit card, driver’s license or student ID.” Queerty reports that the site has even gone as far as to request a copy of a driver’s license from some individual to prove a name is legitimate.

Taking to Twitter and Facebook, Sister Roma has begun to fight against the site’s enforced name changes on social media with the hashtag #MyNameIsRoma. This is an issue that doesn’t just affect her, but a community of individuals who have defined themselves outside of the narrow bounds of the name on a birth certificate.

This issue is discriminatory against transgender and other nonconforming individuals who have often escaped a painful past. They’ve reinvented themselves or been born again and made whole, adopting names and identities that do not necessarily match that on their driver’s license.

Roma posted a screenshot on Thursday that showed correspondence between her and another Sister of Perpetual Indulgence through Facebook. Roma alleges that the messages pertaining to her Facebook name change and some previous ones had been marked as spam and mysteriously removed from the conversation before she could read them.

A Change.org petition has been started in light of these events, asking Facebook to allow performers to use their stage name on their personal profiles. The petition makes a desperate plea, not just for freedom of self expresion, but for safety and privacy concerns as well.

Additionally, many Facebook users—performers or otherwise—use names that are not their “legal names” to help protect their privacy and anonymity, with good reason… By forcing us to use our “real” names, it opens the door to harassment, abuse, and violence.

Some believe that the action isn’t a bigoted one, but one driven by monetary gain. If the site forces performers to migrate to fan pages, they’ll have to start dolling out cash to Facebook for higher billing and promoted posts on fans News Feeds. In a post encouraging performers to purchase sponsored posts Facebook admits a non-promoted post only reaches about 16 percent of fans on average. “Honestly I feel it is about your profile matching your credit card—it’s all about money,” Roma said.