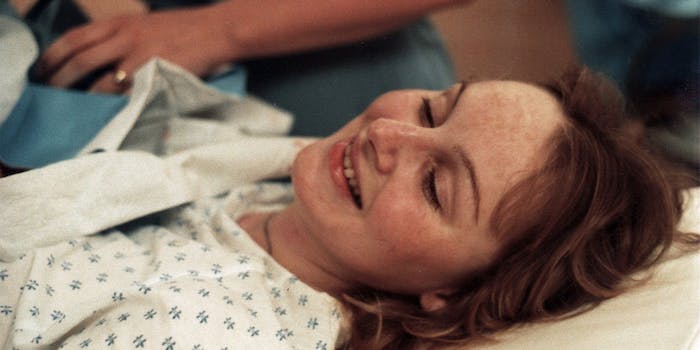 #FreeTheNipple. And the butt. And pretty much every other lady body part.

You’ve probably seen Kim Kardashian’s glistening butt plastered all over Facebook this week. Your friends are probably talking about it non-stop. But there’s one butt photo you likely won’t see on Facebook: An image of a mother giving birth to her child, which was banned from the site after it was posted on a pregnancy support group page.

Earlier today, Milli Hill, a mother, writer, and founder of the grassroots childbirth organization called the Positive Birth Movement, tweeted that she had been banned from Facebook for seven days after posting the following photo of a water birth on the Positive Birth Facebook page. Warning: The photo is a frank and graphic depiction of childbirth, and unless you work for a doula it’s probably NSFW.

I’ve been banned from Facebook for 7 days, for posting this image on the Positive Birth Movement page @birthpositive pic.twitter.com/GhgWTQiFNu

This wasn’t the first time Hill had been banned from Facebook for posting a childbirth photo. Last month, she and the Positive Birth Movement page were briefly banned from the social network after she posted two similar childbirth photos that violated “community standards.” She wrote about this incident in a column for the Guardian.

To further prove her point, Hill tweeted the photo of the water birth next to the now-infamous Paper magazine photo of Kim Kardashian’s rear end:

According to Hill, who spoke with the Daily Dot via e-mail, the image that caused her latest suspension came from a follower of Positive Birth who gave her permission to share it on the site. Positive Birth “share[s] images of birth on Facebook quite often, with the aim of reducing fear, education, empowerment of women,” Hill wrote in her e-mail.

Although Hill’s personal Facebook account has been frozen for seven days, the Positive Birth Movement page is still active. “They have even requested I send them my ID in the form of a photo of my passport,” she writes.

Hill suspects that Facebook is asking for her ID because some users have created false profiles to share banned content. “I have been banned a few times now and they want to prove I am a real person,” she writes.

With no way to contact Facebook directly, Hill has chosen to fight back against the ban by tweeting the photo alongside images of Kardashian’s bottom. “[It’s] interesting how similar the pictures are,” she wrote, “and how one can be so much more readily accepted.”

“Interesting,” yes, and perhaps infuriating as well. Yet this latest example of Facebook’s overzealous content policing is not at all surprising. For years, the social network has come under fire for its confusing and often self-contradictory community standards, with mothers attacking the social network for banning breastfeeding photos, on the grounds that such images violate Facebook’s anti-nudity and sexual content policy. (Facebook technically allows breastfeeding photos on the site now, but that hasn’t stopped other users from flagging the photos as “inappropriate” content.)

Most recently, comedian Chelsea Handler publicly lambasted Instagram, which is owned by Facebook, for banning a photo of her mocking Vladimir Putin by appearing topless on a horse, while simultaneously allowing Kardashian to post photos of her rear end.

“Just so I’m clear, Instagram… it’s ok to use nudity to sexualize yourself on your site, but not to make a joke?” Handler wrote in a caption for the shot, which has since been removed by Instagram. “I’m just so confused.”

Facebook’s community standards are particularly infuriating for Hill and members of her Positive Birth Movement group, who have been banned from Facebook multiple times for sharing photos that fall well outside the definition of pornographic content. The photos in question are nearly identical to ones that can be found in any reproductive health textbook. Given Facebook’s immense popularity, however, Hill doesn’t think that the Positive Birth Movement has much of a choice about staying on the social network.

“I am interested in leaving Facebook but at the moment it is the ‘go to’ social media for most people and a good way to connect with women,” Hill wrote in her e-mail to the Daily Dot. “We are not ‘all about’ sharing images and challenging censorship. We have hundreds of Positive Birth Movement groups across the UK and around the world and we use Facebook to inform people about these groups and also share articles etc of interest. So for now we feel a presence on Facebook is important to us.”

Facebook’s implementation of its policies suggests that Chelsea Handler’s assumption is correct: Using nudity to sexualize yourself on a public platform? Totally OK. Using nudity to make a joke, or to shine a light on a natural and beautiful part of the human life cycle? Not so much.

“Several pictures from this page were mistakenly taken down, but have now been restored. As our team processes more than one million reports each week, we occasionally make a mistake, and we apologize.”