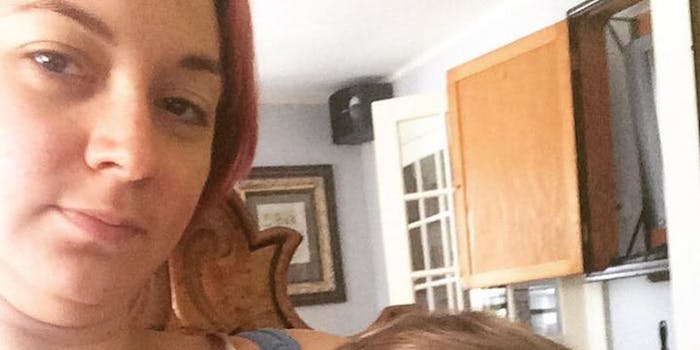 When a 'friend' kept reporting her for nudity, it meant war.

Boston writer Britni de la Cretaz found out who her true Facebook friends are when she posted a photo of herself breastfeeding and a friend reported it for nudity.

In fact, since that friend remains anonymous, she doesn’t know who abused Facebook’s reporting system to get her in trouble for an act that isn’t against the rules.

Cretaz, who is currently nursing her 14-month-old baby, said that she posted a photo of herself breastfeeding while typing because she “was feeling badass.”

“I work from home and was showing off the reality of my life, nursing my kid with one hand and typing with the other,” she wrote.

Facebook’s community standards explicitly permit breastfeeding photos, so when one of Cretaz’ friends reported the image, it wasn’t taken down. Cretaz did, however, receive a notification that her photo had been flagged as inappropriate.

As her profile’s privacy settings were “pretty locked down,” she wrote, the report could only have come from one of her friends. The fact that someone she knew, and not a stranger, had reported the photo left her feeling “angry and betrayed all at once.”

“The fact that someone I knew had reported the photo as being offensive felt like a huge slap in the face (and also like they don’t know me at all and probably shouldn’t be my friend),” she wrote.

Cretaz then wrote a note responding to her unknown adversary.

To the person who reported my nursing photo for nudity: Here’s the photo again, just to you piss you off. Me and my kid are both giving you the stink eye.

2. Unfriend me right now. I’d unfriend you myself, but Facebook doesn’t say who reported a photo. If you’re not OK with seeing me nurse my child, you don’t deserve to witness any part of my life. I share it in full here, and guess what? I’m a nursing mom. I’m not ashamed of it, either. In fact, I’m proud of it.

3. If you’re offended by the sight of a breast (sans nipple, even!), you’re a hypocrite. I’m going to go ahead and guess that you don’t report everyone’s bikini photos for nudity, right? There’s nothing indecent about using breasts for what they were intended for. Maybe if we didn’t objectify women to the point that our bodies exist solely to be sexualized and consumed by the male gaze, this wouldn’t happen.

When someone flagged that post, Cretaz shot back with another breastfeeding photo, vowing to keep posting them so as long as they kept getting reported.

Cretaz called out the stigma and shame placed on women who breastfeed publicly, despite it being a natural part of life.

“We live in a culture where breasts are so sexualized that when they’re used for what they’re intended for, it’s seen as something shameful and dirty,” she wrote. “No one batted an eye when I pushed my tits to my chin and paraded around in low-cut tops. But as soon as I do something with our breasts that isn’t explicitly for male consumption, it’s deemed ‘offensive.’”

Rather than allow an anonymous frenemy to shame her for doing one of the most natural things a woman can do with her body, Cretaz kept posting about it, and her posts led a number of other women to share their breastfeeding photos in the comments.