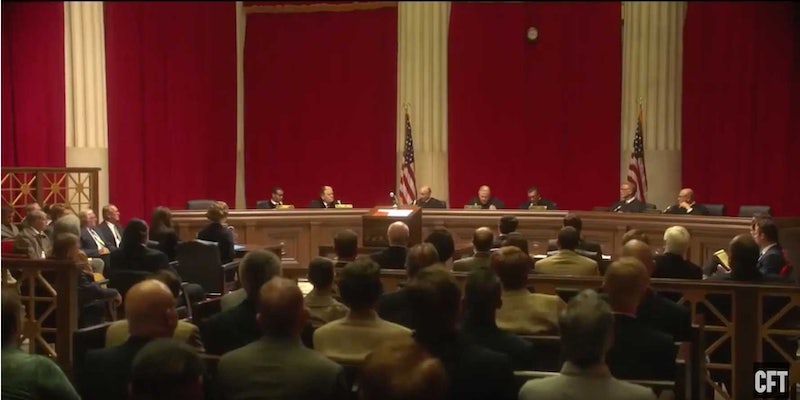 Producer Nick Loeb says Facebook is refusing to run ads for his anti-abortion film Roe v. Wade, but Facebook says he is not just going through the necessary process to get his ads approved.

Roe v. Wade, starring Jon Voight, Stacey Dash, and Robert Davi, is described as the “most important movie to be made in our generation” on its GoFundMe page. However, the film reportedly pushes falsehoods about the historic SCOUTS case and manipulates through the “abortion is eugenics” tactic often implored by the far-right, using a Black girl as the protagonist to argue that her fight against the right to a safe, legal abortion is a means to “save her race.”

“The film reinforces lies that have been told over and over, like Margaret Sanger started Planned Parenthood to kill African-American babies,” an anonymous financier who was approached but declined to invest in the film told the Hollywood Reporter last summer. “All the weird fake news about abortion is in there. All stuff that is easily debunked.”

Loeb now says the film’s being targeted by Facebook because of its politics and the social media giant is censoring his ads. “They don’t like conservative content, so they shadow-banned us,” Loeb told Page Six. “This is a PG movie, no profanity, no gore. They are afraid this movie will overturn Roe v. Wade.”

Shadow-banning is the step taken by a social media site to ban a page’s messages from appearing on the newsfeed, though not necessarily blocking the page entirely, the Economist explains. It is done in order to lessen the attention the page can get.

Facebook did not respond to the Daily Dot’s request for comment but told Yahoo! News that the movie’s message qualifies for its category of “issues of national importance.” Under this mandate, effective since May 2018, advertisers are to disclose who paid for the ad, especially “when the Page name doesn’t match the name of the company or person funding the ad.” The people behind the Ruth Bader Ginsburg documentary, RBG, had to do the same thing.

Despite conservatives’ messaging and President Donald Trump’s push to put anti-abortion nominees on the SCOTUS bench, around 71 percent of Americans do not want to overturn Roe v. Wade, according to the latest polls.

Meanwhile, Loeb is still raising money for his film’s release; he’s reached $345K of his $1 million goal on his GoFundMe page.