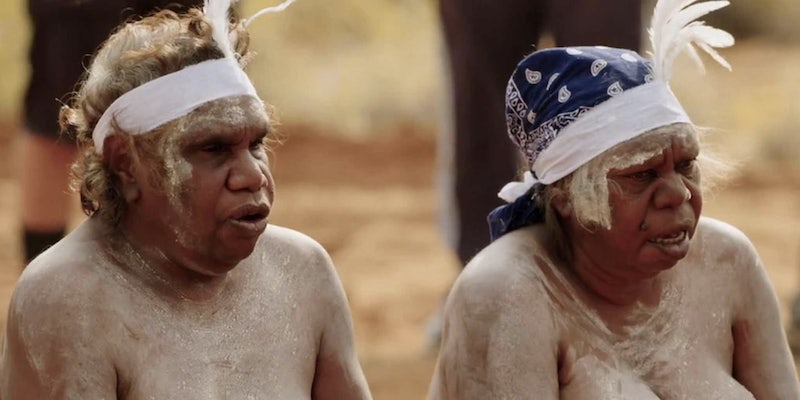 For years, the social network has removed breasts from your feed, from images of post-mastectomy cancer survivors to breastfeeding moms. Now, Facebook’s ban on nudity is extending to photos of topless elderly women in aboriginal Australia.

8MMM is a new show premiering later this month on the Australian Broadcasting Company (ABC). A teaser for the show was just pulled from Facebook because it showed aboriginal Australian women topless and painted in grey for a traditional ceremony. The group received a notification saying the video was being yanked because it contained “potentially offensive nudity.”

After receiving flak for removing photos of cancer survivors and breastfeeding women, Facebook recently updated its nudity policy to allow such photos, although blatantly pornographic images are still not allowed. But there is nothing remotely titillating about the images of the topless Aboriginal woman participating in a traditional ceremony.

Because the trailer technically falls within Facebook’s content guidelines, it’s likely that a random user flagged the video for removal, rather than an admin from Facebook itself. But show co-creator Trisha Morton-Thomas is still not pleased with Facebook’s decision to yank the video, calling it “utterly ridiculous.”

The show is billed as “Australia’s first Indigenous narrative comedy,” and centers around a radio station in a remote region of Australia. Many of the gags in the show play off clashes between modern cultures and traditional indigenous customs—hence, the presence of the topless women.

For the past few years, women have fought the strict guidelines prohibiting female nudity on social platforms like Facebook, even launching a campaign to”free the nipple” on social media. The Free the Nipple campaign has been adapted into a major motion picture and has also been supported by celebrities like Scout Willis and Chelsea Handler, who have shared topless photos on social media to help the cause.

8MMM‘s Morton-Thomas shares the celebrities’ frustration. “The other day I saw a video going around that had a woman in a micro bikini and I thought: ‘Why didn’t she just go naked?’,” she told Australian Broadcasting Company News. “There’s a lot going on in Australia and if you’re going to be offended by women dancing topless, you need to get your priorities straight. I hope people see the funny side of it and have a laugh.”