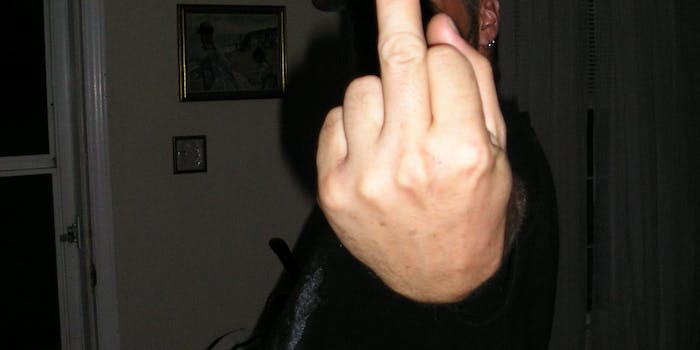 It’s comforting to know we’re all f**king in this together.

The East Coast is bursting with F-bombs right now. This is according to f-bomb.co, a new app that tracks users posting the word “f**k” on Twitter. When someone swears, a little bomb pops up on the map where they’re located. Clicking the icon lets you see who tweeted it.

The F-words appear in real time on the site, so you can watch people swear all over the world and see what they’re swearing about. Some of the tweets are funny, like a user in California who’s declaring everyone is “stupid as f**k.” Some are sad, like a user in Hawaii saying people might finally “give a f**k when I’m gone.”

The site was created to test software developer Martin Gingras’s coding skills, but maybe it could be used for much more. Suicide prevention immediately comes to mind, but marketers might be interested in this service too. (People in Cleveland really seem to f**king hate Kanye West’s new album, for instance.)

But most of all, it’s fun seeing how far people raise the “f**k” stakes. And it’s comforting to know we’re all f**king in this together. In Finland, right now, someone wants me to “f**k the f**k off.” Same to you, my friend. Same to you.