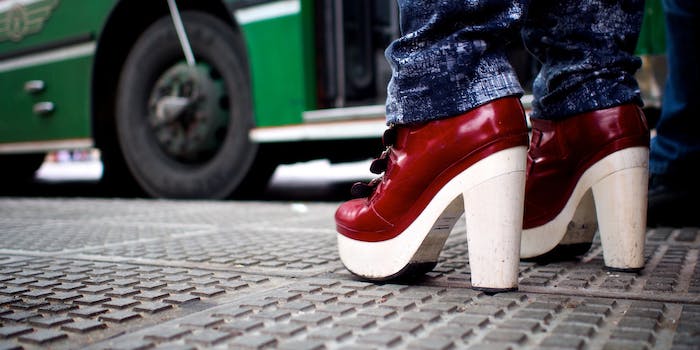 No one knows why the man filed a request for the dancers' entertainer licenses in the first place, but the state is required to provide them—even though doing so might put the women at risk.

Well, this is creepy and horrifying: A group of exotic dancers in Washington state are suing county officials, in an effort to prevent them from releasing their names and addresses to a man who filed a public records request for their personal information. The creepiest part about the whole thing? No one actually has any idea why this dude filed the public records request, or what he plans to do with this information.

CBS News Seattle reports that the two defendants, known only as Jane Doe, filed the suit against Pierce County earlier this week, on behalf of 70 exotic dancers and other employees at Dream Girls at Fox’s, a gentlemen’s club in Tacoma. The man, David A. Van Vleet, apparently filed the public records request a few weeks ago, asking for copies of “all adult entertainment licenses on file.” (Under Washington state law, most exotic dancers have to obtain an “entertainer’s license” in order to legally work, so their real names and addresses are technically a matter of public record.)

There are, obviously, a few problems with this, first and foremost that no one, let alone county officials, actually has any idea why Van Vleet is requesting the real names and addresses of these employees; while CBS News attempted to reach out to him last week, he has yet to offer comment. (A David Van Vleet is listed on the Facebook page for a company called Creative Civil Engineering Solutions in Auburn, Washington; we’ve reached out to him for comment, and will update if we hear back.)

The other issue is that while the county is technically required to release the dancers’ information upon receiving a public records request, releasing their real names and addresses would put them at enormous personal risk, due in large part to the nature of their profession. And this wouldn’t even be the first time a crazed stalker has used public records requests to harass sex workers in Washington state: Last year, a Pierce County man who had served jail time for stalking and assault filed dozens of public records requests for exotic dancers, before they finally sued the county to prevent it from releasing any more records.

Gilbert H. Levy, the attorney for the defendants, is trying to argue that the county should make an exception and refuse to release the records to Van Vleet, due to the dancers’ “unique” shared occupation. “It’s a controversial occupation,” Levy told CBS News. “Some people like nude dancers, and other people for religious or for other philosophical reasons don’t. There’s some stigma attached to the occupation, and most dancers for personal privacy reasons and safety reasons, don’t want the customers to know who they are outside of the club.”

Naturally, sex workers and privacy advocates alike are outraged by the prospect of Pierce County releasing the women’s names and addresses, with many on Twitter using the case as an argument against government regulation and licensing requirements:

@ejdickson @reason the perils of regulating ANY kind of sex work.

Pseudonyms are not just personas, they are protection from many forms of violence & stigma that SWers experience under criminalization.

When you require strippers (or anyone else) to have occupational licenses, you make their personal info public: https://t.co/iG5mRvjI00

Unfortunately, Pierce County Auditor Julie Anderson, whose office handles strip club licenses, told CBS News that barring a court order, she will release the records to the requester next week. “It’s not our job and should not be our role to interpret what the requester’s intentions might be,” she said.