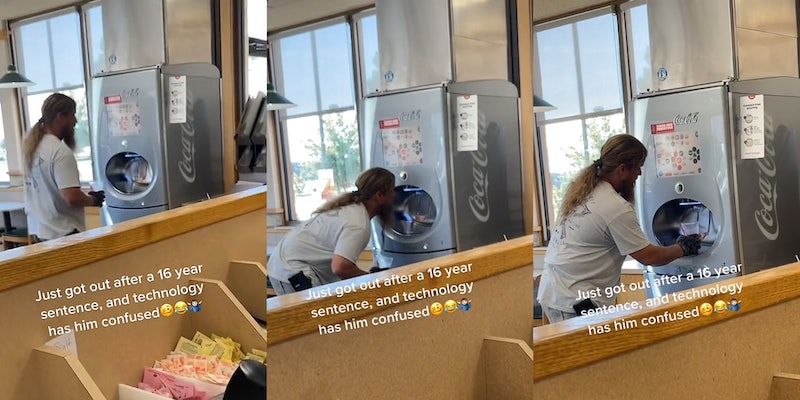 ‘We’re not that advanced yet’: Man struggles to use Coca-Cola Freestyle machine after being released from 16-year prison sentence

'Me with new technology constantly coming out.'

In a now-viral video, a TikToker shares someone’s overwhelming experience of using a modern Coca-Cola Freestyle machine after being released from a 16-year prison sentence. In the clip posted by Austin Biggers (@austinbiggers21) on Oct. 6, Austin shows the alleged former prison inmate walk up to the Coca-Cola machine, lean down, and say, “Dr. Pepper,” to the opening. He places his cup in the spot where he expects the machine to automatically dispense his drink. The text overlay reads, “Just got out after a 16 year sentence, and technology has him confused.”

The man does this one more time as he looks at the machine, puzzled, seemingly wondering how to get it to work. In the background, the TikToker laughs in amusement at his man’s confusion.

The video has garnered over 2.7 million views as of Oct. 7, with commenters also getting a giggle out of the man’s predicament.

“He’s wondering where the flying cars are,” said another, referring to the cliché image many people have when they think about “the future.”

“We’re not that advanced yet,” a third chimed in.

Some users admitted that they have also had trouble with the Coca-Cola Freestyle machines, despite having regular access to technology over the past decade and not having just returned to the general populace after having served a multi-year prison sentence.

“Same thing happened to me but I knew better than to speak on it… I didn’t know how to operate it though,” admitted one person, to which another user replied, “I haven’t even been in prison and those things give me a run for my money.”

Being overwhelmed by certain aspects of everyday life, even something as simple as a Coca-Cola machine isn’t an unusual occurrence for someone who has spent multiple years in prison. According to a report from NBC News, a number of formerly incarcerated people have difficulty readjusting to life after serving a sentence, especially when it comes to catching up technologically. While not having the technical knowledge to get soda out of the machine can be an amusing situation, the issue becomes more serious when ex-inmates cannot successfully re-enter society because access to social services and job programs are all online.

Others chastised the TikToker for just standing by and laughing at his friend.

“Help him for god sake,” said one user.

“Oh. Don’t laugh at him. Help him. He deserves kindness & so much love,” said another.

The Daily Dot reached out to Austin Biggers via TikTok comment.