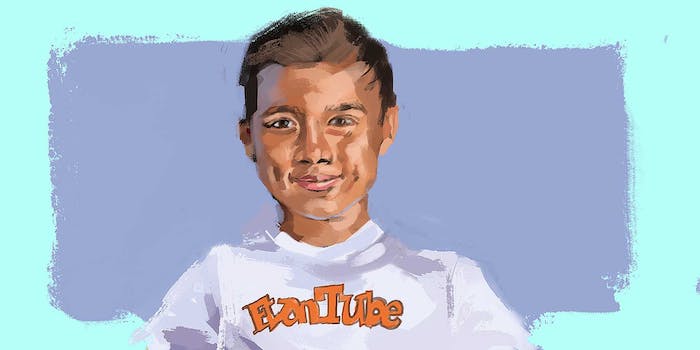 EvanTube is unboxing his way to YouTube fame and a growing fortune.

EvanTube is the YouTube superstar you’ve never heard of, and yet he has more than 1 billion views on his channel. So how did this Asian-American fourth grader become the real-life version of Blank Check?

In 2011, Evan asked his dad Jared (known as DaddyTube by fans) if he could upload the pair’s Angry Bird stop-motion videos to YouTube so he could show his friends at school. The manager of a photography and video production company, Jared didn’t think anything of it until the video hit 1 million views, setting Evan on a YouTube trajectory experienced by few, even well-known, creators.

The father-son duo then began expanding their video repertoire into what Evan is best known for: toy and video game reviews. “And the rest is YouTube history,” joked Jared in a rare interview with Newsweek. (Due to privacy concerns, Evan’s parents have not disclosed his last name or their hometown.) “By doing toy reviews that are a bit ‘out of the box,’ we try to provide information about the product as well as have that creative flare (sic).”

Set against a green screen, the now 9-year-old Evan isn’t afraid to give a tough review. In a set order, he explains the age this toy is meant for, reads the entire box, and finally—his favorite part—begins the assembly, adding his own observations and critiques along the way. In his most viewed video, “Angry Birds Space SOFTEE DOUGH! + Epic SQUASH and Angry FRUITS!,” Evan gained 69 million views by sharing in his adorable, enthusiastic way what worked and what parts of the product would just be ripped and ruined by kids.

In the past two years, YouTube has become a family affair for Evan’s family, who have never released their full names online. After starting EvanTubeHD, Evan’s parents started EvanTubeRaw (1.1 million subscribers) to document their family adventures and EvanTubeGaming(524,000 subscribers) to capture Evan’s “let’s play” videos.

In 2014, Business Insider reported that Evan’s channels generated over $1.3 million in ad revenue alone. The family has publicly stated that all money earned is being placed in savings and investment funds for Evan and his younger sister, Jillian, to access for college and beyond.

In just a year, Evan has doubled his channel views, ending 2015 by joining the billionaires club alongside PewDiePie and Psy.

Even with 2.2 million subscribers to his name and a savings account that resembles Scrooge McDuck’s, Evan seems unaware of his YouTube fame. “As the channel has grown, he has been recognized on several occasions [but] I don’t think he realizes the magnitude of the channel’s popularity,” Jared told Newsweek.

In just a year, Evan has doubled his channel views, ending 2015 by joining the billionaires club alongside PewDiePie and Psy. His success is twofold. The kid-friendly nature of his channel has proven to be something parents and kids can both enjoy; kids want to befriend him and parents want to thank him for finally creating a YouTube channel void of swearing.

For a larger YouTube audience, there is something innately enjoyable about watching a kid enjoy being a kid, opening toys in every video with the sort of energy normally reserved for Christmas morning. And over the years, we’ve grown attached to this tiny toy reviewer as we watch him grow up on our screens.