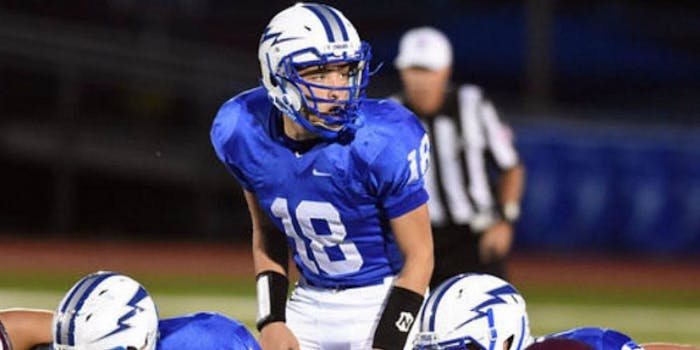 Friend of high school quarterback who died after rough tackle raises $41,000 for his family

Everyone from the New York Jets to New Jersey's governor has weighed in with their condolences.

A high school quarterback died after suffering injuries during a game Friday night, and a GoFundMe campaign has already raised nearly $40,000 to help his family.

Evan Murray, a senior at Warren Hills Regional High School in Washington, New Jersey, was tackled in the backfield in the second quarter of the team’s game, and according to the friend who started the crowdfunding page, Murray “got up like nothing happened.”

But soon “Evan had felt woozy and was taken by ambulance to the hospital. As the hours went on we finally were told that our Captain had passed away.”

As a friend of Evans, I wanted to do something for the family. I started with a goal of 15,000 but shortly realized that Evans passing was felt around the nation. 25,000 was our new goal and we made it last night around 9:30. Not thinking that people would donate i asked around to see if i should rasie it again, some people said yes and some said no, so i just left it. This morning i woke up to an email from someone in town and they told along with many others from around the nation to bump it up because people think they cannot donate anymore. Our new goal is 50,000. this money is ALL going to the Murray family to pay for funeral costs, a stone, medical bills, etc… On top of Evans passing, a family member is fighting a battle with cancer and we hope to also cover their medical bills as well. Thank you to everyone who has donated.

“I can not express enough how much this means to the family and to Warren hills altogether,” read an update on the campaign page. “Thank you to everyone who has donated and supported our school and the Murray family.”

“It looked like a normal tackle,” classmate William Heerwagen, who was watching the game Friday, told NBC News. “He kind of stumbled [while walking to the sidelines after the hit] and then when I looked over, he was on the ground. We thought at worse it was a concussion and that we’d see him Monday.”

On behalf of all the people of New Jersey, Mary Pat and I send our heartfelt thoughts and prayers to the Murray family on the loss of Evan.

Our deepest condolences go out to the family and friends of Evan Murray.

Person you admire most: Evan Murray. Everyone looked up to you Evan. Rest in peace and fly high💙👼🏻 pic.twitter.com/L1HMlIIUGG