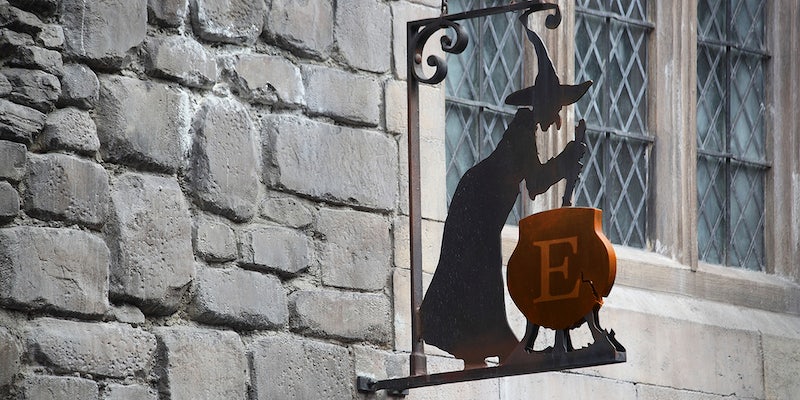 And it (kind of) worked.

“What if I cast a spell on you for journalism?” I asked my husband, Matt.

As a child, I went through various phases convinced I was a witch. To this day, when I predict who’s about to call before the phone rings, or when I get a sense I’m about to run into someone and then—whoa—I do, I still think I have those powers. It doesn’t surprise me that there are others who believe the same thing, whose powers and small-business acumen may be stronger.

I paid $23.60 for a Welsh witch to make my husband and me have better sex.

I discovered the world of Etsy spell-casting a few weeks ago while researching Valentine’s Day gifts. There are whole stores dedicated to spell-casting, tarot reading, and other magical pursuits. You can pay anywhere from $10 to $200 to make someone love you, to do away with bad dreams, or to see what your future will bring. Plus, they’ll send you photos of the work being done.

At first, I didn’t understand why these sorceresses were taking their work to Etsy. Shouldn’t it be harder? Shouldn’t I have to hike to an old cave and answer a riddle to a bat before getting a spell cast? But then I realized that it’s the 21st century, and that sort of thinking is horribly backward. Witches gotta get paid! If anything, Etsy spell-casting is a natural extension of everything the site promises—a dedicated artisan, crafting something specifically for you. Except this time, it involves magic.

So I paid $23.60 for a Welsh witch to make my husband and me have better sex.

Let me preface this by saying our sex life is great. It’s frequent and adventurous and I feel like we’re both satisfied. I opted for the “better sex” spell only because come on, what other spell could I possibly have cast? Self-empowerment spells are too wishy-washy. I didn’t need help finding a partner, and while prosperity sounds nice, my career is actually doing just fine. No, it had to be a spell for better sex, because it’d produce the most tangible—not to mention the most enjoyable—results.

I got the email saying the spell had been cast on a Wednesday, and that photos of the spell-casting itself were forthcoming. According to the Enchanted Land Etsy page, my witch works with “Hoodoo supplies which I myself make by hand,” which provides a twist on the traditional candle service to “empower the magick further”:

I use a cauldron to burn my specially created “spellvelopes.” These are small envelopes whose colour depends on the nature of your spell, and which are filled with the appropriate Hoodoo roots, herbs, minerals , etc, relevant to your chosen spell. I also include a “petition paper” in the spellvelope—this is a hand written outline of YOUR magickal request, written down using magickal Dove’s Blood ink.

After PayPal-ing the witch my $23.76, I was asked to send our full names and birth dates, along with a brief outline of our situation and what I wished the spell to accomplish. I explained that we’d been together for over six years and married for about eight months, and that I wanted to make our sex even better than it already was.

I sent her a photo of the two of us. She emailed me saying she’d book the casting for next week, and that photos of her magic(k) being done would follow a week after that.

They did. They would have come sooner, she said, but she was having computer problems. Apparently, witches can have tech issues too. 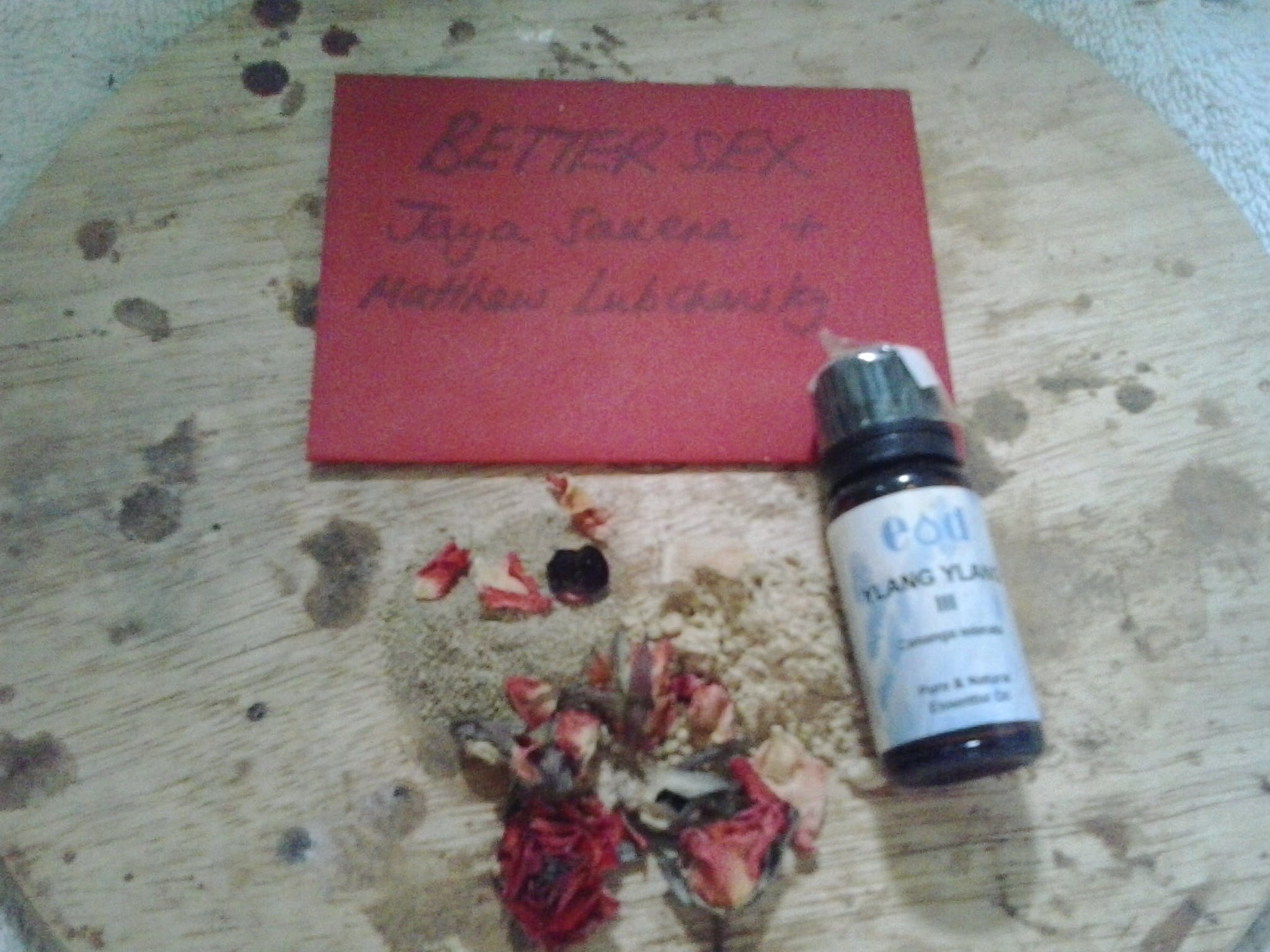 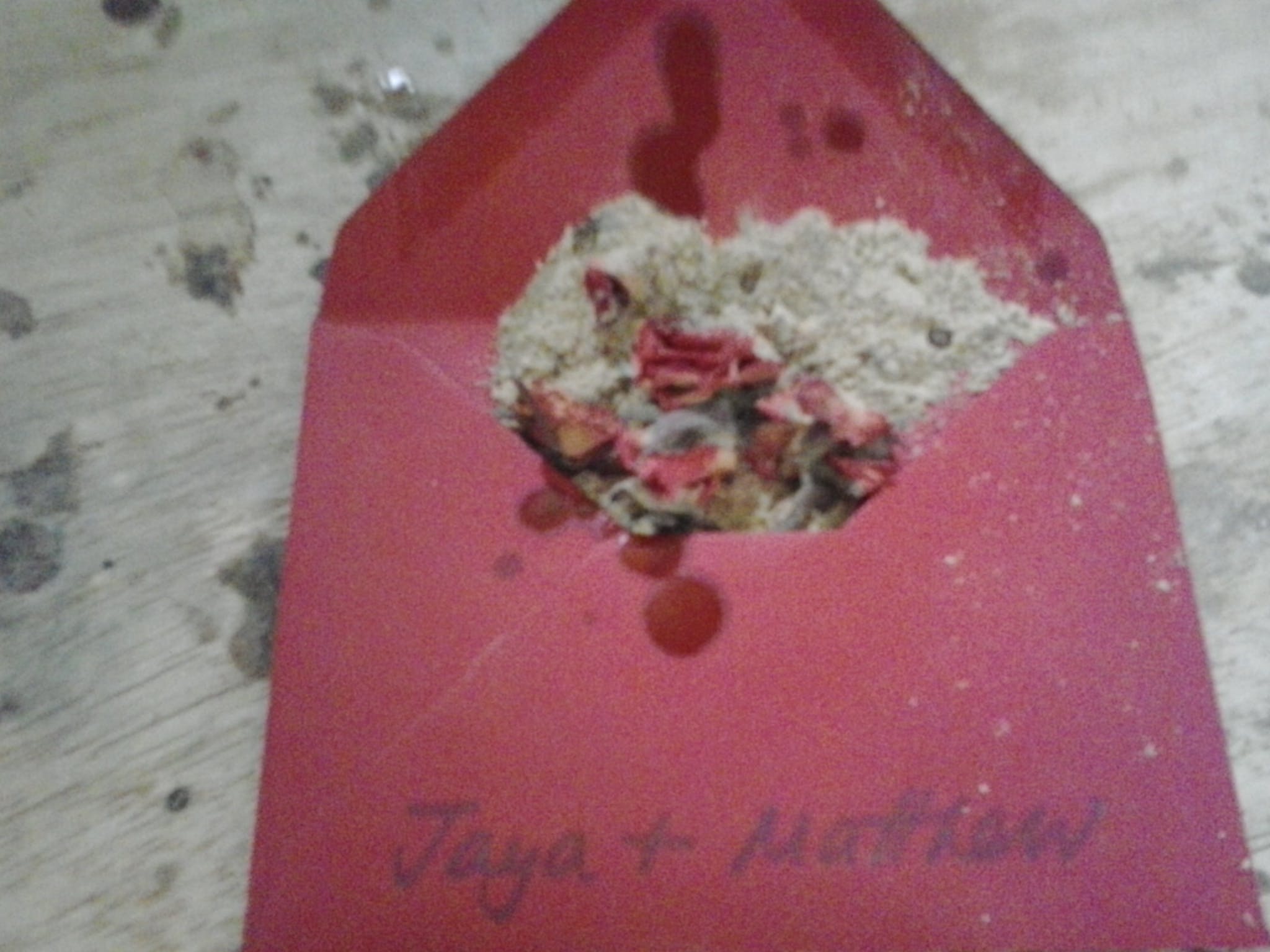 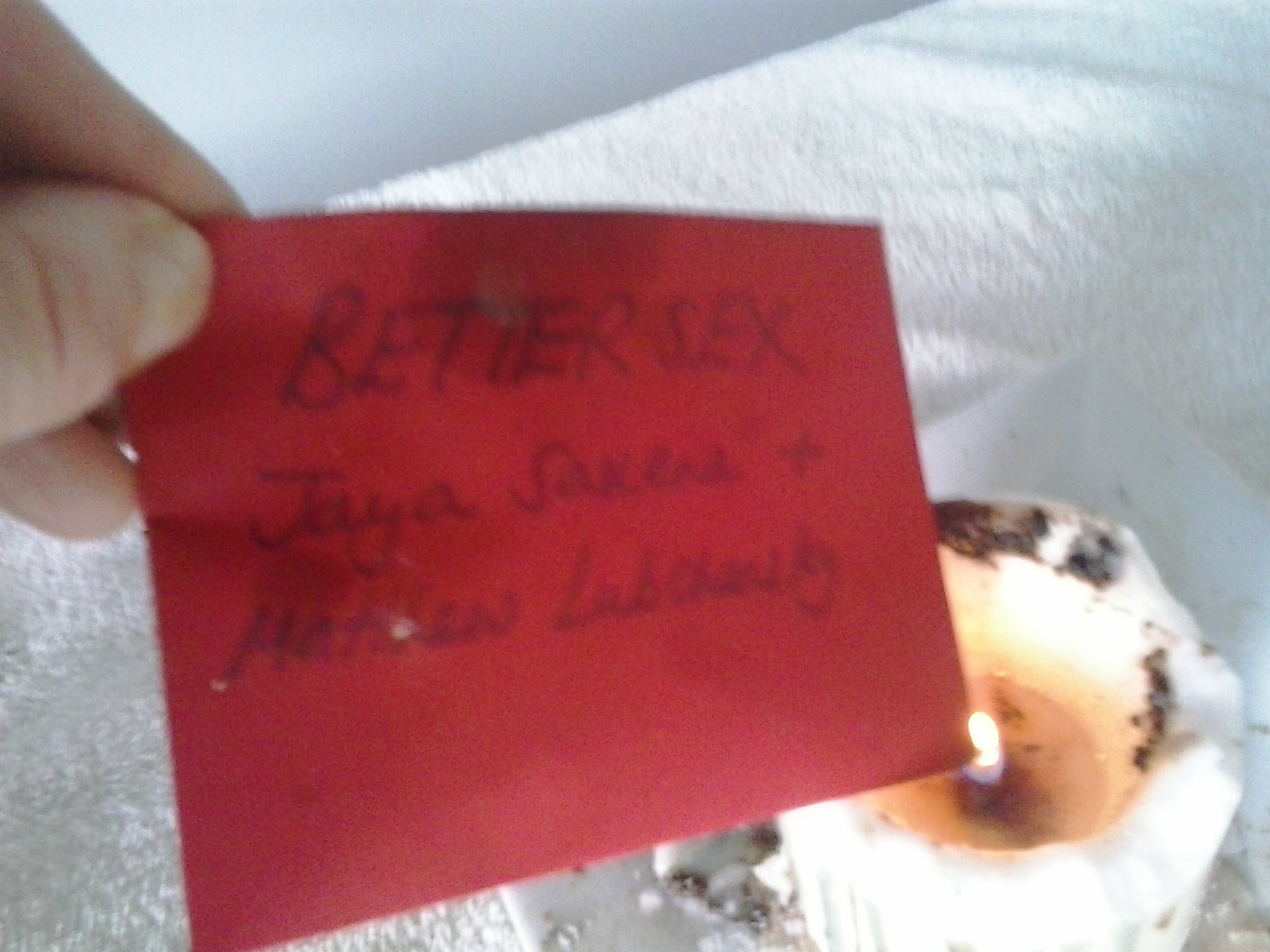 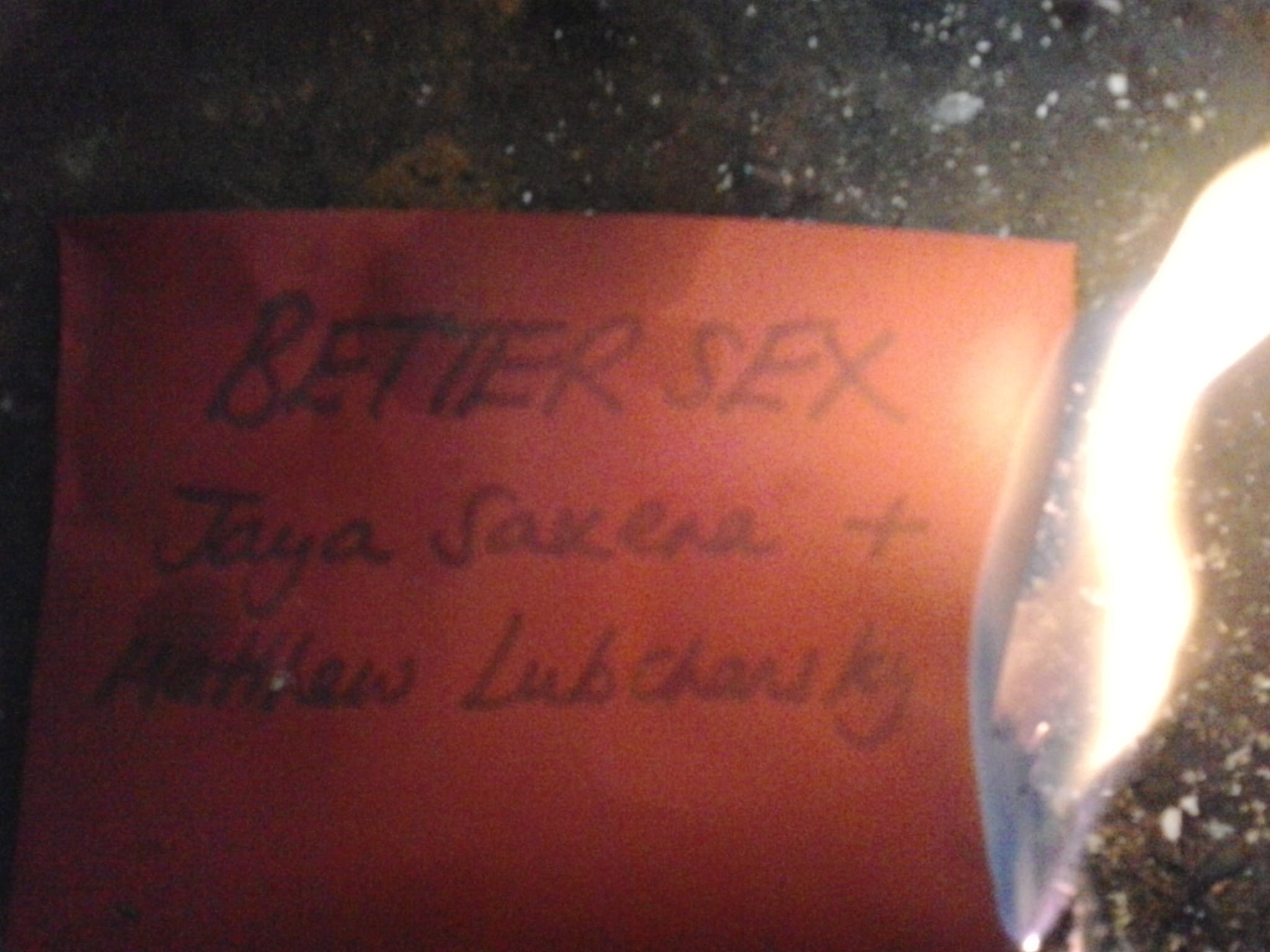 The fire and flowers made it seem like there was magic at work. But after I sent her my money, I discovered this qualifier at the bottom: “NO DECENT SPELLCASTER WILL EVER GUARANTEE A SPELL WILL WORK,” along with a list of why spells may not work, ranging from “too complex of a situation” to “too much negative energy.”

Still, I was determined to believe. I would banish all negative energy from our genitals.

The spell was cast just in time for us to take a 10-day trip to L.A. and San Francisco, where we’d be staying in a friend’s guest room and at an Airbnb with my husband’s coworkers, respectively. These are not the types of places that are conducive to wild, passionate sex, but as any good witch will tell you, the secret of spell casting is intention.

I had to think the spell would work for it to work, which really is a self-fulfilling prophecy. I want better sex, and then I think I’m going to get it, which makes me feel sexier, which makes me act sexier, which gets me better sex. Is that all magic is? I wasn’t sure, but I had spent my money and now my good sex wishes were out in the universe, housemates be damned.

The day after the spell was cast, the sexual energy was palpable. We woke up feverish with desire, ramping from sleepily spooning to frantically making out in an instant. Still, we were in someone else’s house, on someone else’s sheets, so in order to not make a mess, we settled for third base.

We went out to breakfast and had a few hours to kill before meeting up with friends, so we decided to return to the house to work and nap. This time no one was home, but we had already done something that morning, so I figured it was it for the day. But as we were lying in bed, my husband grabbed me and insisted on more.

We made a run for the rental car for the quickest of quickies. “This is it,” I thought. “This is the magic working.”

If you think the rest of the trip continued like this, you’re sadly mistaken, because the thing about travel is that you’re still on planet Earth, where bad things happen. Things like stomach viruses. I hate to say it, but magical intentions aren’t worth shit if you’re spending all your time hunched over the toilet.

The second we touched down in San Francisco, I almost immediately fell ill, rallying for the occasional lunch meeting or dinner and then shivering and passing out by 10pm. It wasn’t long before my husband caught the same virus. Our bodies were useless to each other, except for the occasion one of us could muster the energy to pass the Tums.

There was no way I could feel sexy, even when I got better. I was weak and tired and had forgotten my tweezers. I packed wrong so I was wearing the same clothes every day, and I was really conscious of how I smelled. Even if we had forced ourselves to do something something, the walls were so thin that my husband’s coworkers were bound to hear. There was nothing magical about this.

I was convinced I had somehow angered my witch, perhaps by mentioning I’d be writing about the experience. It was a black-magic curse: I was doomed to have one afternoon of mindblowing sex, only to suffer the rest of my life in bowel-movement hell.

Wishes come true, not free. So what was I missing? What was the loophole?

I tend to yell at every movie where a protagonist casts a spell or makes a wish and it doesn’t turn out the way they want. From the audience’s perspective, the loopholes are miles wide. Of course bringing someone back to life will change him. Of course making someone love you will end up being a curse for you both. Into the Woods drilled into me that wishes come true, not free, so what was I missing? What was the loophole?

It finally hit me once we returned home, finally over our illnesses, freshly showered and shaved, and lying in bed panting after finally being able to touch each other again. I had asked for better sex. What I had not asked for was better sex at the same frequency. The sex was amazing because it was rare. It built up a hunger in us, only rewarding us when we were starved.

After three weeks, I finally told my husband what the spell was for. That night, we had the best sex we’d had in months, possibly because I went to see Fifty Shades of Grey, but also possibly because I had told him. After all, if you go into a job interview thinking you’re going to get the job, you’ll exude the kind of confidence that will make you more likely for that thought to come true.

Toward the end of Into the Woods, the witch warns, “Careful the tale you tell/That is the spell.” The things you say, or the things you forget to say, even just in your head, do have power. The actions you take spiral around your thoughts and intentions. They are the spells you cast on yourself.

I don’t think I believe that any of what I experienced was actually magic at work, at least not in the supernatural sense. People get sick, people travel, people are busy or tired or stressed and sometimes sex just doesn’t happen. Or it does, and it’s great, and then one night, for no reason, it’s even better.

But I admit, before the spell, I had forgotten about my own sexual intentions. I was enjoying sex when it happened, initiating it when I wanted it, but I hadn’t been thinking about it. I had cast a spell on myself that was getting harder and harder to break without help. The Etsy spell was worth it to undo that. Twenty-four bucks is not much to pay to remind myself of my own desires.

Photo via Sam Howzit/Flickr (CC BY 2.0) | Remix by Jason Reed