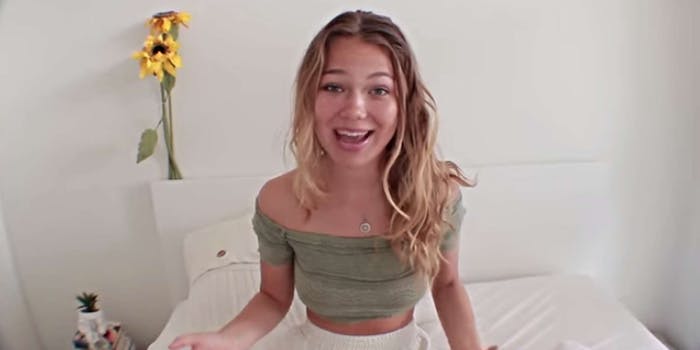 'It left me sitting in my room never wanting to leave.'

Last time we heard from Essena O’Neill two months ago, she announced in an emotional YouTube video that she was done with social media and planned on creating a new site called “Let’s Be Game Changers,” where she’d share her true self. Now she’s back with a newsletter updating her fans on how she’s been doing, what’s happening with her supposed new venture—and the death threats she’s received.

O’Neill’s November confessional-style video (which has since been removed) caught the eyes and ears of Internet users worldwide. The 18-year-old Australian model and social media star claimed that her Instagram presence was all smoke and mirrors. “Having it all on social media means absolutely nothing to your real life,” she said at the time. She detailed the pressures of having to constantly look beautiful for the cameras, shilling products that she didn’t even like just to make money, and proving to the world that “you are enough.”

Her latest communique comes in the form of a 6,210-word email, which touches on many of the same themes as her earlier video.

Social media was my full time job and took up majority of my life. I would spend eight hours a day photographing, styling, editing, filming, scrolling… Finding people with similar passions was incredible – eating out for free, every little moment could be a perfect candid snap or silly vlog, we’d talk about my nonstop boy problems, and bitch about other youtuber’s/instgaramers that I knew personally. That was my life. Constant shoots, photos, editing and an artificial smile. I am not one bit proud of my actions, if that’s not already clear.

In the wake of her video, fellow social media influencers took to their own channels to criticize O’Neill. Identical twins Nina and Randa created a video of their own picking apart what O’Neill said and claiming to have the “real story” of the young Australian who stayed with them while she was visiting L.A. One vlogger, a vegan like O’Neill, posted a video called “ESSENA O’ NEILL NEEDS TO GO TO JAIL,” claiming what she’s done “might even be illegal.” That’s why O’Neill spends a portion of her newsletter addressing the aftermath of her YouTube confession.

I never in a million years thought these people would turn around and publicly ‘hate’ me.

Having people you shared so much with do that… well it left me crying myself to sleep. It left me sitting in my room never wanting to leave.

There I said it.

She says she “felt like screaming, ‘DO YOU ALL JUST WANT ME TO KILL MYSELF? TO DIE? AM I THAT HORRIBLE? WHAT HAVE I DONE REALLY DONE TO YOU?’” She also says she’s received death threats and been accused as an “attention seeking whore.”

As for “Let’s Be Game Changers,” O’Neill says it is no more. “I took down the site three weeks ago simply because I just couldn’t be on the Internet. It felt toxic. It got to the point where I just wanted to write, the satire/memoir that I’m currently working on but more so fiction. Sci-fi novels have been my dream since I was 12.”

She took the many donations to the budding site and gave them to three charitable organizations, including the Animal Foundation of Florida, the Megan Meier Foundation and the Fred Hollows Foundation. “I believe that money is now in the hands of those who are going to make real positive change in our society,” she writes.

While this may be her last public communication for a while, she assures fans that “the next time you hear from me, I’ll be standing stronger than I could have ever stood before.”

She writes that “time heals,” but will it be enough to heal the scars made by fellow social media stars?