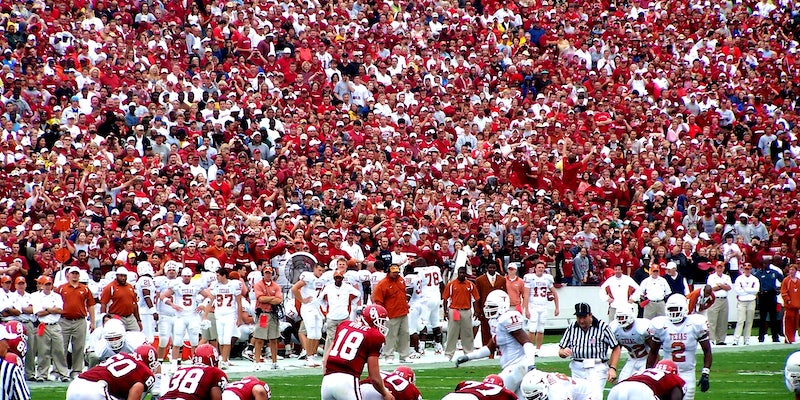 University of Oklahoma linebacker Eric Striker wasn’t one to mince words when he discussed his thoughts on the Sigma Alpha Epsilon racist chant video that resulted in the fraternity chapter being shut down and kicked off campus.

Striker made a short video on Snapchat to express how he felt about it—and unsurprisingly, he wasn’t happy. Although the video was probably meant for friends, it quickly spread online after someone recorded it with another recording device and posted it online.

Striker has already apologized for the video in a Twitter video posted by a teammate. But he made it clear that he was only apologizing for the explicit language he used in the video, not for the message he was trying to communicate.

“I’m not apologizing about how I feel,” Striker said. “I’m hurt. My heart is hurting. But I do apologize for the curse words.”

Eric Striker meant no harm by the snap chat.. He was angry and spoke off emotions and he is sorry for the cussing. pic.twitter.com/iKKuiz6lFt

Please don't judge my brother Eric Striker by that emotional snapchat. He truly meant no harm by it!

Ever since the original video surfaced Sunday night, University of Oklahoma students and alumni have spoken out against it on social media. School authorities reacted quickly, with the national chapter of SAE suspending all members of the University of Oklahoma chapter. President David Boren also severed all ties with the fraternity, calling the students “disgraceful.”

“We will look at all possible punishment for the student leaders most involved in the incident…up to and including expulsion,” Boren said during a press conference Monday.

If you're more concerned about wearing your Greek letters than showing solidarity, you are part of the problem #notonOUrcampus #OUUnheard