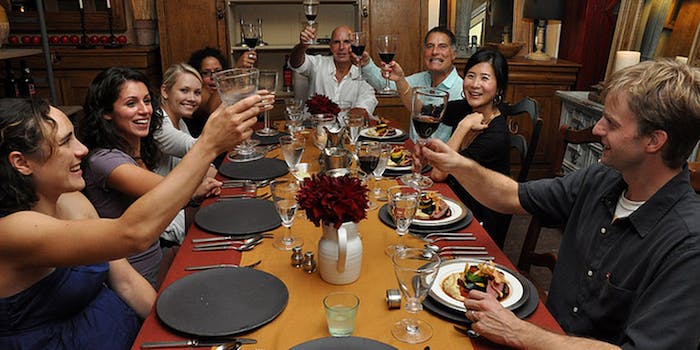 Photo via dinnerseries/Flickr (CC by 2.0)

Comic Luna Malbroux has developed an app that will truly even the playing field.

Paying the bill at the end of a group dinner is never pleasant. It takes forever to figure out who owes how much, and splitting it evenly will burden your friend who only ordered a salad and water. Thankfully, comedian Luna Malbroux has developed an app that will truly even the playing field.

In January, Malbroux won the grand prize at Cultivated Wit‘s 2016 Comedy Hack Day, an event that pairs comedians with developers to create hilarious tech. Team Malbroux’s winning invention? Equipay, an app that accounts for gender and racial wage gaps when splitting the check. And while the app is the brainchild of a comedian, it’s hardly a joke: In March, Equipay will be available for download on iOS.

Malbroux has a background in social work, and she is committed to using comedy to address societal ills. And, certainly, the wage gap is an issue that needs to be addressed. According to a report issued by the National Women’s Law Center in 2012, women earn only 77 cents for every dollar that a man earns. The same report found that the situation is even more dire for women of color: In 2011, black and Latina women, on average, earned 64 and 55 cents on the dollar respectively.

For this reason, Malbroux adopted an intersectional approach when coming up with the concept for Equipay.

“As a Black woman, I was always acutely aware that the 77 cents didn’t include all women,” she told the Daily Dot in an email. “I thought of different ways to illustrate this, in [a] way that can be usable for everyone. And most people have dined out before in large groups so I thought there would be humor in that, as well as an opportunity to show how the wage gap effects everyone differently.”

The final app will work similarly to the version presented by Malbroux at Comedy Hack Day. First, users are given the opportunity to self-identify their racial and gender identity. (Note that Equipay views gender as a spectrum, not a binary.) 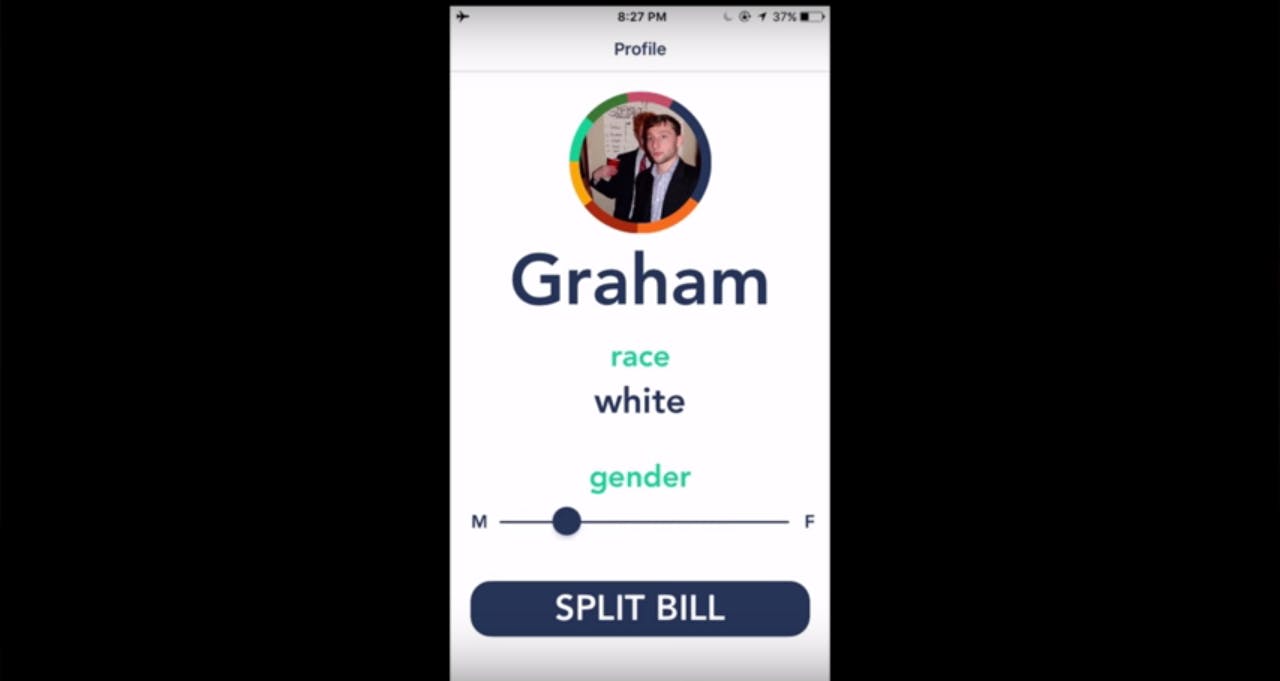 Then, users can search for their friends, select those joining them for dinner, and calculate how much everyone owes. White men will pay the most; women of color will pay the least. 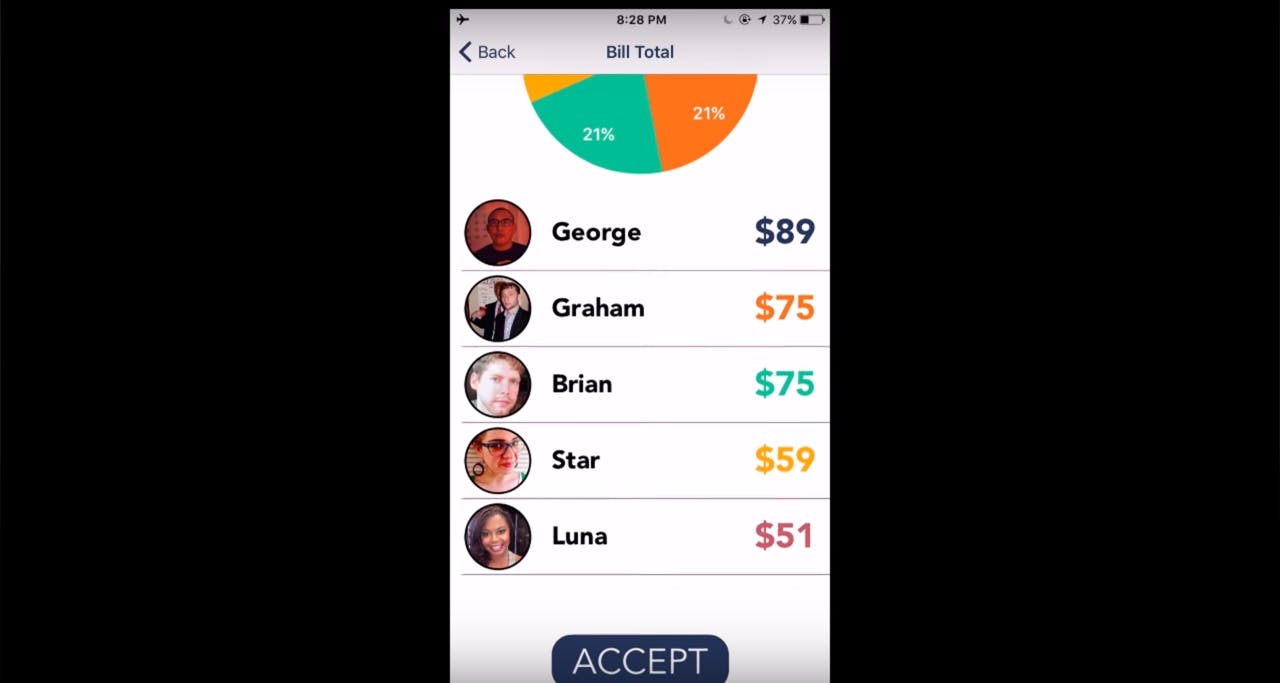 If there are any concerns, users are given the opportunity to appeal their results. 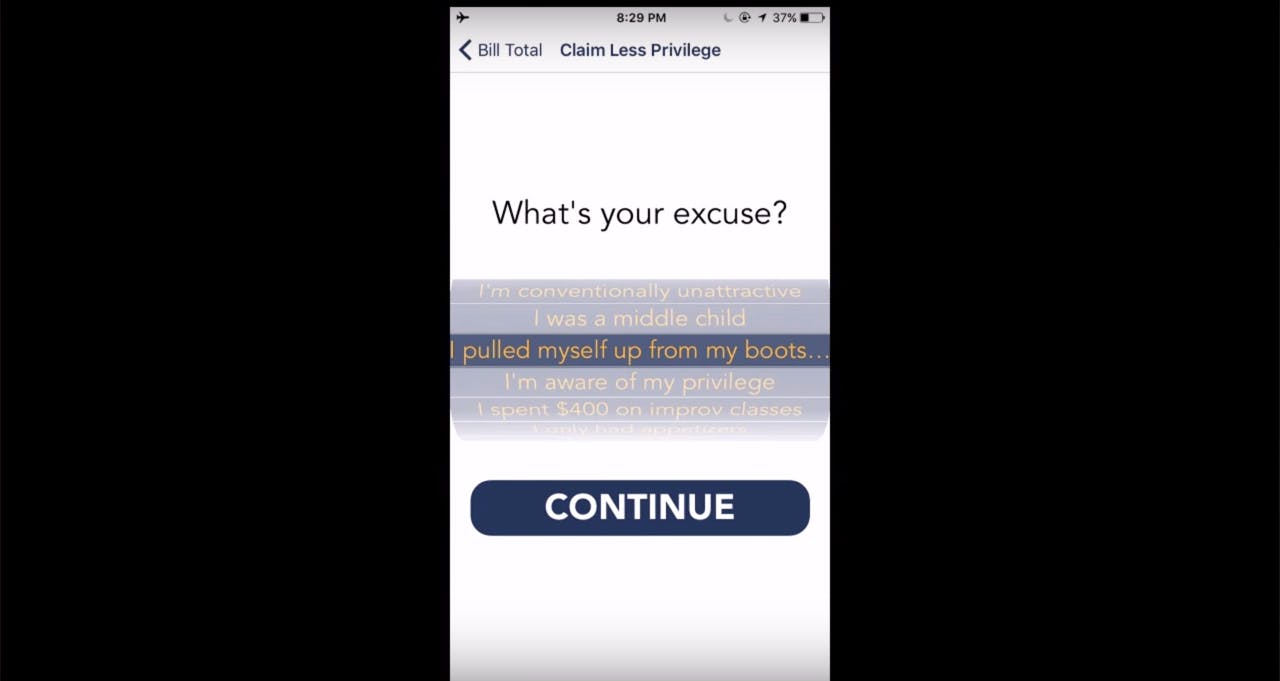 But this is unlikely to work out well for them. 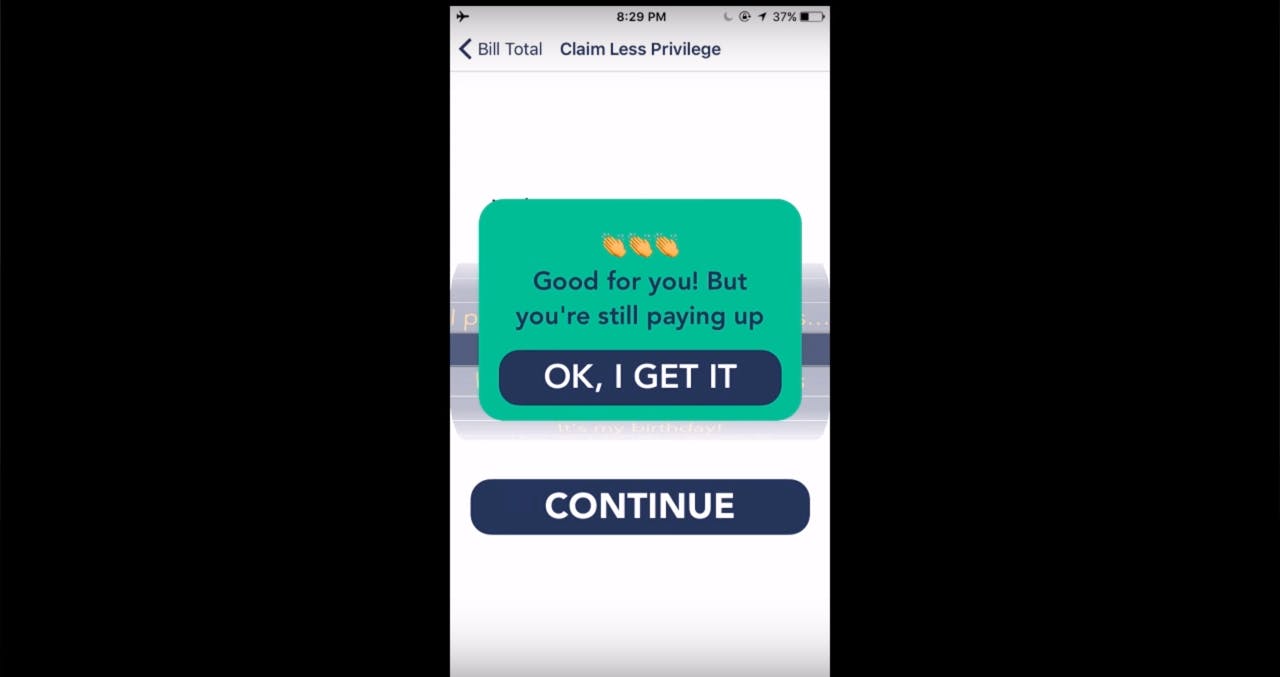 Equipay is not the first creative endeavor to strive to address the wage gap; traveling pop-up shop <100 is a project that allows people to “pay what you’re paid” while simultaneously supporting craftswomen and female business owners. What makes Equipay stand out is its reliance on humor and satire while still engaging users on a very serious topic.

“We all love to laugh,” Malbroux told the Daily Dot. “We all want to be connected over human, everyday experiences. I love that comedy provides an opportunity to do all this, but also has an element of surprise where you can talk about the serious issues while also connecting with audience members.”

Malbroux stressed that Equipay is the product of a truly collaborative process with her teammates: UX/UI designer Star Zargofsky, visual artist Brian Carter, developers Franklin Ho and Rohan Dhaimade, and comics and copywriters George Chen and Graham Starr. It is because of their collective skill and commitment to the project that Equipay is becoming a reality, she said.

“The talent of the team was very real, and there was a genuine interest in seeing how this would shake out with the public,” Malbroux explained.

Malbroux characterized the response to Equipay as “overwhelmingly positive,” but she’s not resting on her laurels. She and the rest of the Equipay team are committed to further developing and improving their app. For example, though the app only accounts for gender and racial income disparities in its current incarnation, Malbroux would like to see that change in later updates.

“Our calculations are based on the Bureau of Labor statistics and we are the first to admit that there are lots of things the current app doesn’t account for—such as regionality, citizenship status, and sexual orientation, just to name a few,” Malbroux told the Daily Dot. “With more time and updated statistics, I’m sure we will be able to convey facts about how the wage gap may affect each person differently.”

Though no firm release date has been announced, Equipay is expected to be available next month. iPhone users looking to make their dinner outings a bit more socially conscious can stay tuned to Equipay‘s website for more updates and announcements.

Photo via dinnerseries/Flickr (CC BY 2.0)